Word of the Week: Greatness 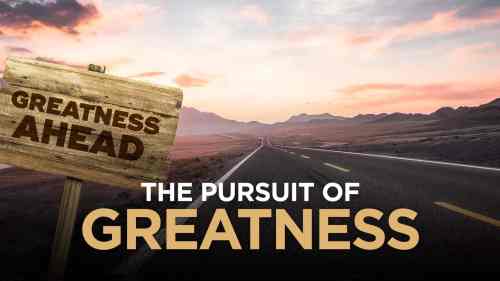 One of my favorite stories, although it’s probably apocryphal, is about a group of tourists visiting a picturesque village in Europe.

As they toured, admiring the beauty, the cathedral and the architecture of this quaint 13th century village, one tourist spotted an old man sitting on a bench. In a rather patronizing way, he asked, “Were any great men born in this village?”

The old man looked up and replied, “Nope, only babies.”

The point was well made. People are not born great. They grow in greatness. It’s takes time. Effort. And energy. It’s a process.

This, however, raises the question, how do you define “greatness”?

Our culture often identifies greatness with material success. Achievements that pertain to wealth, fame, position, power, possessions and influence are carnal measurements of greatness. This attitude, however, is nothing new.

Even among Jesus’ own apostles there was a dispute “ among them as to which of them was considered to be greatest.”

No doubt Jesus’ answer was not what they expected, nor how the world today would identify greatness.

While we should each seek to do our very best in whatever position, role or responsibility we find ourselves, our greatness is not defined by our accomplishments. It is measured in God’s eyes by our character. Attitude. Integrity. And virtue.

In this text, Jesus says the road to greatness is found through humble service. The principle enunciated by the Savior is that His followers “lead by serving, and we serve by leading.”

Jim McGuiggan, in his fine book “The God of the Towel, wrote, “For Christ ‘service’ wasn’t a spiritual ‘ladder to success’ in the sense that, if we’re willing to serve a while, we’ll get power later! It wasn’t a performance so that he would be rewarded. It was his character.”

Like Jesus, who came not to be served, but to serve (Matt 20:28), we discover our true greatness by ministering to the needs of others. Husbands, who are identified as the heads of their homes, serve the needs of their families. Parents do the same for their children.  As a 2012 Nike ad, promoted you don’t have to be an Olympic champion to  find your greatness.

In the Lord’s church, Shepherds are spiritual servants, not masters “lording it over” the flock (1 Pet. 5:3). Being a elder in the church is not about position, but serving people. Likewise, preachers, are not to be seeking permanence and power, but servants of Christ, who minister in the Word to encourage, enlighten and edify the congregation.

Greatness is inward, not outward. “A grateful heart is a beginning of greatness,” observed the American religious leader James E. Faust. “It is an expression of humility. It is a foundation for the development of such virtues as prayer, faith, courage, contentment, happiness, love, and well-being.”

Even the business world today is learning that greatness is not flaunting one’s position and arbitrarily exercising power. John Maxwell, as well as other business mentors, have been teaching for years the principle of servant-leadership. The two slogans of Rotary, an international organization of business and professional leaders is “He profits most who serves best.” And “service above self.”

Obeying the Second great command of loving others as much as self and applying the “Golden Rule” of treating others like we want to be treated, will put us on the road to greatness. As one writer expressed it, “You treat people with greatness and greatness will come back to you.”

May we all seek to be like one early 20th century preacher who was described by an observer this way. “He was a great man, but he didn’t know it.”

Filed under Service, Word of the Week

One response to “Word of the Week: Greatness”