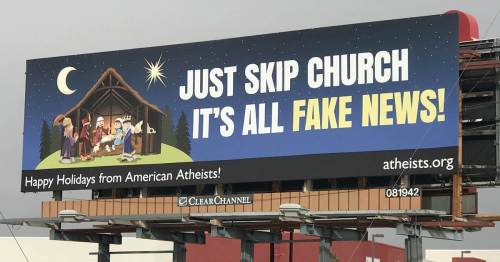 While on Christmas break we learned of billboards that appeared in the Dallas Metroplex, as well as other major cities around the country with the above message.

Provocative signs like these have been an annual Christmas tradition sponsored by the American Atheists. “Everyone knows that the stories we’re told in church aren’t the truth,” said David Silverman, president of American Atheists. “People ignore that fact because they enjoy the community, the friendship, and the traditions that go along with religion.”

Although it might seem we’re a little late to the party, it’s never too late to open the Bible and separate fact from fiction. What does the Scripture say about Christmas and Jesus’ birth? END_OF_DOCUMENT_TOKEN_TO_BE_REPLACED

“Who made off with Jesus?”

“Who made off with Jesus?”

This question was the lead sentence in a New York Times story several years ago. It seems that thieves broke into the building of the “Church of the Holy Cross” in Midtown Manhattan and stole a 200-pound plaster image of Jesus. It had been removed from a wooden cross that hung near the entrance of the building. END_OF_DOCUMENT_TOKEN_TO_BE_REPLACED 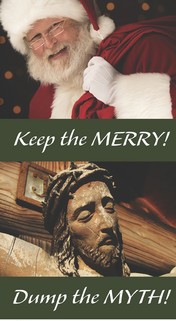 On Tuesday a new billboard went up in NYC across from the M & M store in Times Square. It features two images and six words.  The first is Santa Claus with the words “Keep the MERRY!”  The second is an image of Jesus that reads, “Dump the MYTH!”

The group responsible for the billboard is the American Atheists.  It’s a part of their annual winter campaign to insult Christians and demean Jesus.

The Atheist President, David Silverman, is quoted as saying, “We know that a large population of ‘Christians’ are actually atheists who feel trapped in their family’s religion. If you know god is a myth, you do not have to lie and call yourself ‘Christian’ in order to have a festive HOLIDAY season. You can be merry without the myth….” END_OF_DOCUMENT_TOKEN_TO_BE_REPLACED