Watts was a quarterback for the University of Oklahoma Sooners in the late 1970’s and led his team to two consecutive Big Eight Championships. After receiving his B.A. degree in journalism, he played in the Canadian Football League for several years.

In 1994 Watts ran and won a seat in the United States House of Representatives and served until  2002. Today he is involved in business. Serves on several boards. Is involved in ministry. Is a frequent speaker. And the author of “Dig Deep: 7 Truths to Finding the Strength Within.”

Last night Mr. Watts spoke to us about the importance of personal responsibility and accountability. The value of our relationships with others. And how to develop trust. END_OF_DOCUMENT_TOKEN_TO_BE_REPLACED

Life Is All About Change

Love him or loathe him, but one thing is for sure, President Donald Trump has really brought change to Washington in just 10 days!

His demeanor, personality, approach, retorts, and of course, constant tweeting is change from every past President. Some like it. Others hate it so much their responses border on the irrational. Already there is a web site, ironically called change.org, demanding for the impeachment of President Trump. END_OF_DOCUMENT_TOKEN_TO_BE_REPLACED

The Challenge of Change

America is changing. And changing at a lightning fast speed. It’s been happening so quickly some of us can hardly keep up.

The current political climate and the two candidates running for President reflect a change in our electorate. Yet, they are the two most disliked to ever win the nomination and run for the highest office in the land.

A decade ago marriage was defined, as it has been for 5,000 years, as a union between one man and one woman. Today that has changed. END_OF_DOCUMENT_TOKEN_TO_BE_REPLACED

9 Things I Know About Change

Every Monday I receive an inspirational quote of the week from Franklin Planner. It’s their way of adding value to their customers, while promoting their products. Yesterday’s quote spoke to me in a special way.

“Change is not made without inconvenience, even from worse to better.” (Richard Hooker) END_OF_DOCUMENT_TOKEN_TO_BE_REPLACED

Word of the Week: Change 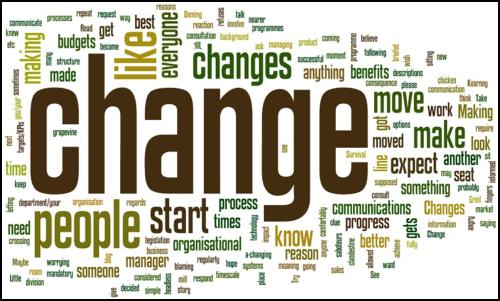 My  friend, Jim Dorn, shared this story with me a couple of years ago.

There was a family that lived out “in the sticks”, far from civilization. One day the family made their first trip to the “big city” and visited a mall. They were amazed by almost everything they saw, but especially by two shiny, silver walls that could move apart and back together again.

The boy asked his father, “Pop, what is this?” END_OF_DOCUMENT_TOKEN_TO_BE_REPLACED

Filed under Change, Word of the Week

Wow!  I awoke this morning to find that Fall is gone and Winter has come to Kansas  City!  The thermometer on my porch reads 20 degrees!

So, I turned to Action 41 Weather to learn what was going on. With charts and graphics, Meteorologist Kalee Dionne  explained it had something to do with a cold Arctic air mass dipping down into the United States.  Well, I believe it! And Kalee didn’t make me feel better my reporting it was actually 18 in Lee’s Summit with a wind chill of 7 degrees!  Brrrr! END_OF_DOCUMENT_TOKEN_TO_BE_REPLACED

Are You Ready For Change?

Samuel Langhorne Clemens, a.k.a. Mark Twain, is credited with saying, “Everybody talks about the weather, but no one does anything about it.”

Well, people have been talking, that’s for sure.  Especially here in Kansas City.  Monday, KC recorded a record high for January of 74 degrees.  It was over 60 when I woke up Tuesday AM.  By lunch time it was 48 and dropping.  And this morning snow flakes are falling! END_OF_DOCUMENT_TOKEN_TO_BE_REPLACED