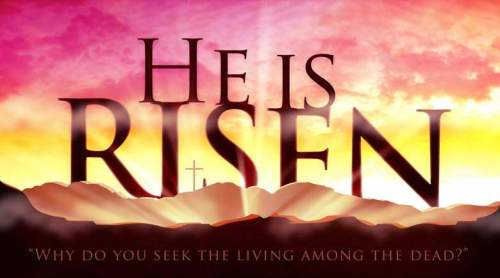 This pretty much describes the mood from the women at Jesus’ tomb, to the disciples on the Emmaus road, to the scattered 11 now huddled in secret and fearfully wondering what was next.

For three days the disciples’ world has been turned upside down. They will forever remember the events from Thursday night to Friday night as the saddest 24 hours of their lives.

Jesus is betrayed by Judas. His grief overcomes him, and his takes his own life. Peter succumbs to temptation and denies Jesus. Three times. When the rooster crowed the second time, remorse filled Peter’s heart and he went out and shed bitter tears.

From Jesus’ trial to His appearances before Pilate and Herod, sad faces sought to get a glimpse of the Teacher. As He carried the cross to Calvary, the women who followed Him mourned, lamented and wept. John stood with Jesus’ mother, Mary, at the foot of the cross, as she watched her son writhe in agony.

And then the pronouncement by the soldiers assigned to the cross, “He is dead.”

Scared and sorrow-filled, their heavy hearts wait. But for what?

When the women arrived at the tomb very early on the first day of the week, it was empty. The men in white apparel said, “Why do you seek the living among the dead? He is not here. He is risen.” (v. 5-6)

They wanted to believe, but somehow couldn’t. Yet, they return to share this amazing encounter with Peter and the other apostles.

Then we see Jesus joining the two men walking from Jerusalem to Emmaus. They’re talking about what has happened. They had pinned their hopes on the belief that Jesus was the prophesied Messiah. But their dreams are dashed. Or so they think. Until Jesus reveals himself.

Now with open eyes and burning hearts, they returned to Jerusalem to share the Good News with the disciples, “The Lord has risen.” (v. 34)

While the two were sharing their story, suddenly Jesus appeared in the room even though the door was shut. To the startled and frightening group Jesus said, “Peace to you.”

As Jesus showed them his nailed scarred hands and feet to prove it really was Him, Luke describes their mixed emotions. “And while they still disbelieved for joy and were marveling” (v.41).

But Jesus “opened their understanding that they might comprehend the Scriptures” (v. 45).

Luke concludes his treatise with Jesus’ commission to preach His name “among all nations” and to serve as His witnesses (v. 46-49).

Then the disciples “returned to Jerusalem with great joy” (v. 52).

It is the power of the resurrection narrative. Take time to read it in it’s amazing detail. Put yourself in the place of these people. Contemplate what they were thinking. Feel their emotions. Commiserate with their consternation. Experience the renewal of their hope and irrepressible joy.

Haven’t we all been there? Feeling the depths of despair. Our hopes dashed. Our vision blurred. Our spirits dampened. Our thinking obscured. Our focus clouded. Our future darkened.

It may come in the form of a terminal illness. An untimely death. A natural disaster. A financial collapse. A moral failure. A personal rejection. A bitter divorce. Or unrequited love. Whatever the circumstance triggering it, the desperation is real. Painful. And crippling.

However, we need to remember that our real hopes and dreams are not rooted in the richness of this life, but in a risen Savior. The resurrection reminds us of our future hope. It dispels our doubt. Dissipates the fog. Clears our vision. And renews our strength.

Whatever your day brings, just remember “He is risen.” And that makes all the difference.

Tagged as A Passage to Ponder, Resurrection of Christ