Six Lessons From An Icy Road 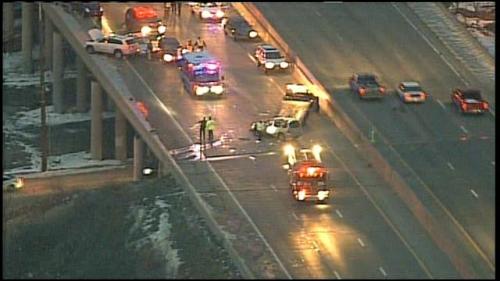 Sunday evening on the way to worship service, I noticed a light mist on my car’s windshield.  We had a skiff of snow early Sunday morning.  So, I wondered out loud, “Is that a spray from the cars in front of me?”  Or is that sleet?”

On the way home, we found out.

Traveling North on I-49 toward the I-470 ramp heading to Lee’s Summit, I noticed  lots of tail lights.  Traffic was backed up.  “Oh, no, there’s probably been a wreck!”  Quickly, I exited before reaching the traffic jam.

“Do you know where you’re going?”  Norma Jean asked.

“Sure.”  I said confidently.  “I can cut across to Longview Road and go home that way.  Probably this road will take me over to it.”  Well, it didn’t.  After driving a bit, I decided to turn on my GSP.  But I couldn’t get a satellite signal, so I kept driving.

Cheerfully, I told Norma Jean, “Well we’re going East.  That’s the right direction.”  Finally my GPS picked up a signal. We were close to Longview.  I could get home from there.

Suddenly we came to a four-way stop.  And I couldn’t stop!  Fortunately, the other two cars on the crossing road waited for me to slide through!  Now, we were heading down a narrow, slick, hilly road.  And Norma Jean is encouraging me by saying, “I’m getting scared.”  And “Why don’t you turn around!”

Finally we reached Longview.  The warmth of home was only three miles away.  But there was one more decision.  There were three different roads I could take to get home.  I chose the one that seemed the safest.  But quickly learned it was the wrong choice!

As I came over the crest of a hill, there was a car turned around in the road.  Another car just slid and bounced off it!  As I gently tapped my brakes, I began to slide a little.  Fortunately, I was able to slow down, gain control, and come to a stop behind a long line of cars.  Flashing lights ahead indicated there was an accident.

After a considerable wait, an emergency worker came to each car and told us that traffic was stopped not only for the accident, but because of the icy conditions.  They were waiting for a salt truck, but it would be awhile.  When I suggested the possibility of turning around by crossing the grassy medium, he gave me the go ahead.

A few minutes later we arrived at home.  A 15 minute drive had taken an hour.  We were relieved. Unharmed.  And thankful.

As I have reflected on our Sunday evening adventure, it seems in some ways to be a metaphor for life.  And for our spiritual journey.

(1) Life is filled with decisions.  Sometimes we make good ones.  Other times we don’t.  But it’s difficult to know what lies ahead.  What seems like a good idea at the moment may soon result in a treacherous path.  Poor spiritual decisions land us on the wrong road.  And in a perilous situation.

(2) It’s good to know what road you’re on!  And where that road is taking you! I’m reminded of the fellow whose wife said, “We’re lost, aren’t we?”  “Yes,” he replied, “But we’re making great time!”  Getting on the wrong road spiritually can lead to eternal destruction.  If you don’t know where you’re heading, better stop and find out.

(3) Don’t get ahead of your GPS!  Stop. Program it.  Wait for a signal.  And follow directions.  God’s GPS is called the Bible.  It’s an infallible guidance system.  It’s never wrong. It will guide you home.

(4) The road may be hazardous even when it appears safe.  I couldn’t see the ice.  But it was there!  It was slick.  Unsafe.  Dangerous.  This is true spiritually.  How many times have we slipped unintentionally?   The Devil finds a way to disguise temptation.  To make something appear safe, when in reality danger is lurking.  God says “Be watchful.  Stay alert. Be careful.”

(5) Sometimes when you’re in a jam, you just have to turn around!  It’s true physically, as well as spiritually.  Look for a way out.  A way of escape.  A new path.  A different direction.

(6) When you get home, thank God!  Knowing that Norma Jean was getting worried, I tried not to show any fear.  But there were a couple of tense moments.  We were thankful to be safely home.  Later we would learn of several who were in serious accidents. At least one life was lost that night.

Spiritually, thank God for His amazing grace. For His goodness.  For His protection.  As John Newton wrote, “Through many dangers, toils and snares, I have already come.  ‘Tis grace hath brought me safe thus far, and grace will lead me home.”

3 responses to “Six Lessons From An Icy Road”