Word of the Week: Excellence 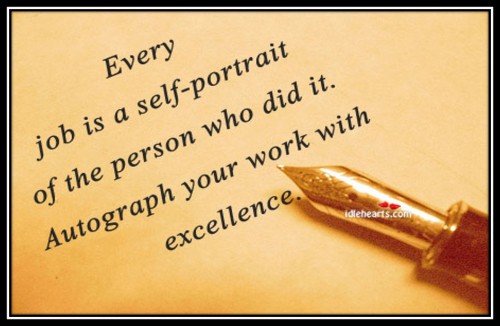 When Henry Kissinger was Secretary of State the story is told he once asked an assistant to prepare an analysis on a certain initiative. After putting in long hours on the project, he gave Kissinger the report. An hour later it was returned with a note to redo it.

The assistant stayed up all night redoing the report. Again Kissinger asked for him to redo it.

After the third attempt, the assistant asked to see Kissinger. “I’ve done the best I can do,” he told the Secretary.

“In that case, I’ll read it now,” Kissinger replied.

Our word of the week is “excellence.”

Excellence is doing the very best we can do. It is shunning the demon of mediocrity. It is going beyond the good, and the better, to achieve the best. The person striving for true excellence is not really in competition with others but is seeking to be the very best that he can be. It is doing more than is expected or required.

Jesus articulated this concept in His Mountain Message when he challenged his followers with these famous words. “And whoever compels you to go one mile, go with him two” (Matt 5:41). Christianity is the religion of “the second mile.”

The Bible calls for excellence in thinking on things that are noble, virtuous and praiseworthy (Phil. 4:8). Excellence is exhibited in life that resists its baser impulses and aspires to the “divine nature” (2 Pet. 1:2-3). And excellence adds to its faith the Christian graces of virtue, self-discipline, perseverance, and brotherly kindness (2 Pet. 1:5-8).

Excellence was demonstrated in the life of Daniel while in Babylonian captivity. “Daniel purposed in his heart that he would not defile himself with the portion of the king’s delicacies, nor with the wine which he drank…” (Dan. 1:8). He could have easily acquiesced to the cultural norm or conformed to what others were doing. But he chose a nobler path.

As a result, the Bible says, “Then this Daniel became distinguished above all the other presidents and satraps, because an excellent spirit was in him. And the king planned to set him over the whole kingdom” (Dan. 6:3).

Author and motivational speaker Chris Widener once gave a speech to a group in Kansas City who assigned him the topic “Simply the Best.” In that talk, Widener said the best are optimists. They have vision. They pursue personal growth. They focus on building relationships. They make no excuses. And the best relentlessly pursue excellence.

The desire for excellence ought to be zealously pursued in every area of our spiritual walk of life. This spirit produces employees that do more than just work a job, they work for the Lord. It infuses families who go beyond living in the same house but build relationships, make memories, and are bonded with love. It permeates the assembly of a church who goes beyond just meeting as usual, but worship with  vigor and vitality that is contagious.

Excellence is not necessarily doing something that is unusual or exceptional. As John W. Gardner expressed it, “Excellence is doing ordinary things extraordinarily well.” It is doing “a common thing in an uncommon way.”

Legendary football coach Vine Lombardi was right, “The quality of a person’s life is in direct proportion to their commitment to excellence regardless of their chosen field of endeavor.”

Hold yourself to a higher standard. Pursue excellence.

4 responses to “Word of the Week: Excellence”