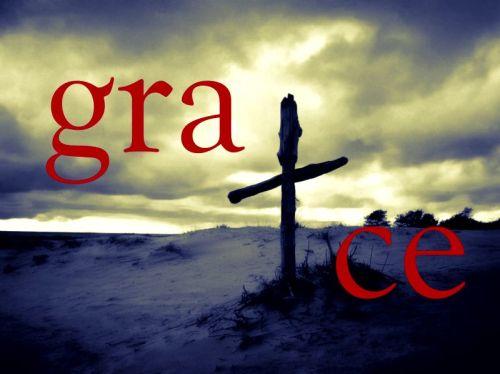 I’m  reading Perry Hall’s book “Grace Does That?”  In it he tells the story of  Charles Bradlaugh and Hugh Price Hughes.

Bradlaugh was the most prominent atheist in 19th century Britain.  On one occasion he challenged the evangelist Hughes to a debate on the validity of Christianity.

Hughes, who worked in the poor slums of London, agreed, but on one condition.  “I propose to you that we each bring some concrete evidences of the validity of our beliefs in the form of men and women who have been redeemed from the lives of sin and shame by the influence of our teaching. I will bring 100 such men and women, and I challenge you to do the same.”

On the Friday Jesus was crucified by wicked men, God’s grace was in full view, but they didn’t know it.  Every kind of evil motive was on display that day.  Hate. Envy.  Pride. Hypocrisy.  And Greed.

Yet God was moved with love.  Mercy.  And grace.

The Hebrew writer affirmed, “But we see Jesus, who was made a little lower than the angels, for the suffering of death crowned with glory and honor, that He, by the grace of God, might taste death for everyone” (Heb. 2:9)

The cross is the ultimate expression of God’s grace.  Jesus came to earth so that I can go to heaven.  He became poor so that I might be rich. He suffered because of my sins. He tasted the death I deserve. He was grace personified.

What was the blackest Friday in all of history became a glorious Sunday when by God’s grace Jesus overcame death and the devil’s grip.  He gave us hope.  Showed us the way.  And opened the door to the gift of God’s grace.

Listen to these powerful words from Paul’s pen.

But God, who is rich in mercy, because of His great love with which He loved us, even when we were dead in trespasses, made us alive together with Christ (by grace you have been saved), and raised us up together, and made us sit together in the heavenly places in Christ Jesus, that in the ages to come He might show the exceeding riches of His grace in His kindness toward us in Christ Jesus. For by grace you have been saved through faith, and that not of yourselves; it is the gift of God (Eph. 2:4-8).

Grace and Truth came through Christ. And was demonstrated by Christ. Because of Friday’s sacrifice and Sunday’s resurrection, I don’t have to be afraid of death.  Separated from God.  Or lost eternally. The Truth can set me free.  And I can receive grace.

Jesus’ redeeming work on Friday and his victory on Sunday suddenly becomes personal.  Practical.  And profound in my life.  When I think of my failures, frustrations, and feel fatigued spiritually, I am emboldened by grace. Strengthened by grace.  Sustained by grace.

In a small sense I can relate to what Paul, the persecutor turned preacher felt when he wrote “But by the grace of God I am what I am, and His grace toward me was not in vain; but I labored more abundantly than they all, yet not I, but the grace of God which was with me” (1 Cor. 15:10-11).

Thank God for his gift of grace!

Filed under Cross, Grace, It's Friday. But Sunday's Coming!

Tagged as Grace, Grace Does That?, It's Friday. But Sunday's Coming, Perry Hall