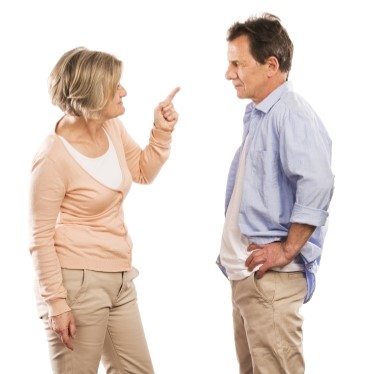 It seems to have escalated in recent years.

Conflict between “Trumpers” and “Never Trumpers.”

Conflict between Republicans and Democrats.

Conflict between liberals and conservatives.

Conflict between those advocating vaccine and non-vaxers.

Conflict on the highway and conflict on airplanes.

And now we’re seeing conflict play out on the world stage with Russia’s President Putin’s aggression toward Ukraine in defiance of President Biden and the NATO nations.

However, we don’t have to look to national or international events to observe conflict. It can be seen close to home, as evidenced by these news stories.

In Orlando, a 48-year-old man was shot to death by his wife after a fight over the satellite TV controls.

In California, a man was stabbed to death by his girlfriend because he brought home a Mcdonald’s ham, egg, and cheese bagel instead of the two Egg McMuffins that she requested.

In Dallas, a 37-year-old man was beaten to death by his roommate after a fight over the thermostat setting in their house.

In Maryland, a 15-year-old boy has been charged with the shooting death of a man who was playing reggae music on his car stereo.

Sadder still is the conflict too often witnessed in our homes and churches among those claiming to be disciples of Christ.

While we cannot solve conflicts in Washington or around the world, there are some steps we can take to cope with conflict on an interpersonal basis.

When you have serious difficulty with someone John Maxwell suggests finding the 1% in which you’re in agreement and giving it 100% of your effort and energy in working with that person. The Bible exhorts, “Do everything possible on your part to live at peace with everyone” (Rom. 12:18).

If you love opinions more than people, you will defend your opinion and destroy your friendships. Ask yourself, “Are my opinions helping or hindering my relationships with people?” The wise man put it well. “A fool takes no pleasure in understanding, but only in expressing his opinion” (Prov. 18:2).

#3 Give Others the Benefit of the Doubt.

We often rule ourselves with our hearts but we rule others with our heads. We extend mercy on ourselves but pronounce judgement on the other person. Apply the “Golden Rule” (Matt 7:12). How do you want to be treated?

#4 Provide an Escape Hatch for the Person in Conflict.

What one thing often keeps us from allowing the other person to save face? One word: Pride. Ask yourself, “What is more important?” Being right. Or saving your relationship. Indeed, “Pride only breeds quarrels…” (Prov. 13:10.

#5 Check Your Own Attitude.

Are your conflicts limited with just one person, or are there conflicts with several people? If it’s lots of people, maybe you’re the problem! Dr. David Schwartz offers this principle regarding attitudes, actions, and relationships. “How you think determines how you act, how you act determines how others react to you.” Developing the mind of Christ will solve a lot of conflicts (Phil. 2:5).

Realize you’re have going to have some conflict. We don’t agree with everyone. And not everyone agrees with us. Even in our families. Or churches. It’s part of life. The advice of James will serve us well. “Dear brothers, don’t ever forget that is it best to listen much, speak little and not become angry” (Jas. 1:19 LB).

Don’t take disagreements personally. Don’t feel affronted, become accusatory, and lash out in self-justification. We never resolve conflicts by being defensive. A secure person knows how to say, “I’m sorry.” I
was wrong.” “I made a mistake.” Or even admit the possibility, “I may be wrong.” “A wrathful man stirs up strife, but he who is slow to anger allays contention” (Prov. 15:18).

Finally, the observation of President Ronald Reagan is worthy of our application. “Peace is not the absence of conflict, it is the ability to handle conflict by peaceful means.”

One response to “Coping With Conflict”