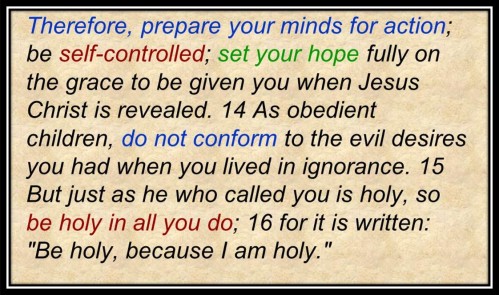 “I soon discovered.” Carson wrote, “ that once or twice a week he disappeared into the red-light district of town. Obviously he went to pay his money and have his woman. Eventually I got to know him well enough that I asked him what he would do if he discovered that his wife was doing something similar in London.”

“You don’t understand. Where I come from in Africa, the husband has the right to sleep with many women, but if a wife is unfaithful to her husband she must be killed.”

“But you told me you were raised in a mission school,” Carson probed. “ You know that the God of the Bible does not have double standards like that.”

“He gave me a bright smile and replied, ‘Ah, God is good. He’s bound to forgive us; that’s His job.’”

In our mixed up, messed up world today with morals ever changing and quickly eroding, many are like that young man. It’s an attitude of individualism. A spirit of secularism. And a belief in relativism. Truth becomes whatever we want it to be for ourselves. And God, if people even believe in Him, is pictured as a gracious, benevolent old grandfather who with a wink and a nod, is very lenient and always forgiving.

In today’s text, the apostle Peter paints a very different picture. He calls us to a higher standard. A new life. And conduct that emulates the character of God himself.

Holiness is not a popular pursuit today. Nor is it really understood very well. A 19th century Scottish theologian, John Brown, expressed it this way: “Holiness does not consist in mystic speculations, enthusiastic fervours, or uncommanded austerities; it consists in thinking as God thinks, and willing as God wills.”

A preacher once asked a group of disadvantaged, inner city kids in Bible class “What is holiness?” A poor little boy in tattered rags, jumped up and exclaimed, “It is to be clean inside.”

This passage provides both a basis and an incentive for holiness. If we care about what our Heavenly Father thinks and desires of us, we want to be more like Him. Christianity calls us to a higher standard of living. A nobler perspective. And a goal of goodness and godliness.

Furthermore, we know we will be judged by our everyday behavior. God’s grace will not excuse our blatant disobedience and selfish disregard for His commandments.

Peter reminds us that we’ve been redeemed by the blood of the Lamb. Jesus died for our sins. Not so we could continue in sin. “God forbid,” as Paul wrote in Romans. Rather, we’re challenged to rise above the passions, putridity and moral degradation of our carnal culture.

While happiness seems to be the highest goal of our age, God calls us to holiness. “The true Christian ideal is not to be happy but to be holy,” wrote A. W. Tozer. “The whole purpose of God in redemption is to make us holy and to restore us to the image of God. To accomplish this He disengages us from earthly ambitions and draws us away from the cheap and unworthy prizes that worldly men set their hearts upon.”

Peter challenges his readers to purity of life in a polluted world. It wasn’t easy then. And it’s not easy now. There has always been an “anti-God atmosphere around us,” as one writer put it. A culture of corruption. A world of wickedness. A life-style of licentiousness.

Holiness, however, is possible, if we will be sober minded, self controlled and focused on the hope we have of eternal glory.

Ultimately, as George Hodges expressed it, “To know Christ is the way to grow in holiness.”