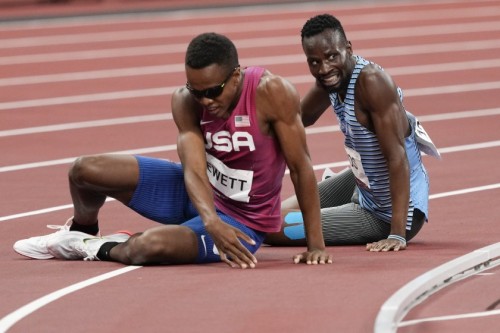 Although the Olympic Games in Toyoko felt different this year with the COVID restrictions, lack of fans, and the tape delays, it still offered some exciting photo finishes, world records broken, and real-life lessons.

With one lap to go, a runner ahead of her tripped, creating a domino effect. Hassan tried and failed to jump over the fallen runner and then fell down herself.

Undeterred, she got back up and resumed the race, although she was now in last place. But one by one she began passing the other runners. On the final straightaway, she passed five of the fastest runners in the world, winning the heat to finish first.

“Believe me, it was horrible, but sometimes I think bad things happen for good,” Hassan said. “When I fell down I said to myself, OK life doesn’t always go the way that you want.”

The apostle Paul often compared the Christian life to a race. He said that he wasn’t running aimlessly, but with purpose in every step in order to receive the eternal reward (1 Cor. 9:24-27). From a Roman prison, Paul wrote that he was still running…pressing on to win the heavenly prize (Phil. 3:13-14). Then as he rounded life’s final turn, he could confidently say, “I have finished the race, I have kept the faith” (2 Tim. 4:6-8).

Like the Olympics, our Christian race will probably involve some missteps. Some stumbles. Some falls. Yet, think of God’s greats enshrined in “Faith’s Hall of Fame” who also suffered some falls.

The list could continue of others who suffered a fall from grace, who failed to live up to their calling, and who stumbled in some way.

The list could also include my name. And yours. “All have sinned and fall short of the glory of God” (Rom. 3:23).

In his book Following Christ, Joseph Stowell asks these probing and penetrating questions:

Who among us has not gone astray and indulged our flesh in some manner?

Who among us has not taken a detour after a driving ambition?

Who among us has not flirted in their mind with adultery?

Who among us has not risked stepping beyond the parameters of what is right?

And I would add, who among us has not been enticed by the devil’s devices and fallen into the snare of temptation’s trap?

Some falls are more devastating than others. Harder to overcome. And fraught with life-altering consequences. But, we can all get up and resume the race.

In another Olympic event, Isaiah Jewett, a US runner was in front of Nigel Amos from Botswana and just about to go into his kick on the final turn of the men’s 800 meters. Suddenly Amos hit the back of Jewett’s heel and both fell to the track. There would be no amazing comeback this time.

But in a gesture of good sportsmanship, Jewett and Amos helped each other to their feet, put their arms around each other, and finished together the semifinal heat. In last place. 54 seconds behind the winner.

Jewett harbored no hard feelings. But he said that he had one simple rule when he’s racing: Finish. He made sure Amos did, too. By the way, neither runner won any medals.

Your fall may have been caused by someone else’s negligence, fall, or failure. But you have a choice. Stay down. Or get up and resume running,

And finish the race.

2 responses to “When You Fall”