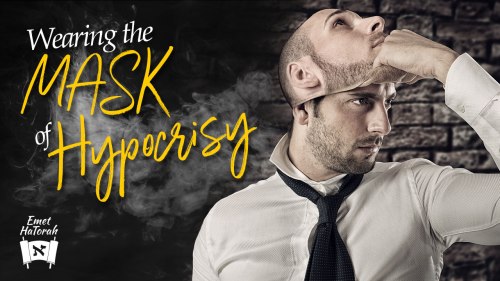 “Half of the misery in the world comes from trying to look, instead of trying to be, what one is not,” once wrote the 19th century Scottish minister George MacDonald.

This practice can be summed up in one word. Hypocrisy. It’s wearing a mask. Pretending. Acting instead of being. In a twisted way, “Hypocrisy is an homage that vice pays to virtue,” suggested the French writer La Rochefoucauld.

In our Bible reading today, we see a classic example of hypocrisy played out on the stage of the early church. It’s the familiar story of Ananias and Sapphira. To refresh your memory take a moment to read it.

There are several lessons we can learn from this vivid narrative that is the first recorded smudge on the face of the early church.

1. Their sin was incited by Satan.

As Warren Wiersbe writes “We must face the fact that Satan is a clever foe. If he does not succeed as the ‘devouring lion,’ then he attacks again as the ‘deceiving serpent’ or an ‘angel of light.’” Since attacks from without failed, he went inside to deceive the hearts of this Christian couple.

(2) Their sin was provoked by pride.

They lied about their contribution to the church. They claimed to give the entire proceeds from a sale of property, but didn’t. They kept some for themselves. Why?

At the end of Acts 4, Barnabas is praised for selling his property and giving the entire amount for this special need. It doesn’t take much imagination to conclude that they also wanted to be recognized for their generosity. To be publicly praised for their philanthropy. To be admired for their altruism.

Like the Pharisees they apparently loved the praise men. But as Jesus said of those hypocrites, that was the entirety of their reward. And it was very short lived.

3. Their sin was galvanized by greed.

They desired the acclaim and applause from others, but didn’t want to pay the price. They withheld part of the proceeds for themselves. It was selfish ambition gone to seed that concocted this shameful scheme. Truly, this was a case where the love of money resulted in this evil enterprise. Their gift was merely a cloak for their conceit and covetousness.

4. Their sin resulted in death.

“The wages of sin is death,” Paul penned. We know that means spiritual death. Eternal separation from God. But in this case God signaled his displeasure on this sinful scam immediately. Ananias was stuck dead. And then Sapphira suffered the same fate three hours later.

No wonder Luke records, “So great fear came upon all the church and upon all who heard these things.”

The application of this narrative is obvious. Indisputable. And possibly painful.

What is our motive for doing good? For giving? Serving? Sharing? Are we really what we claim to be?

Are we standing strong against the wiles of the Devil? Avoiding him like a roaring lion? Shunning him like a venomous snake? Guarding our hearts against  his beguiling and enticing devices?

Have we allowed pride to fill our hearts? Motivate our decisions? Influence our actions? And override our better judgment?

Has greed got a grip on us? Has the desire for material possessions and financial security hindered our ministry? Hampered our spiritual growth? Closed our hearts? And caused us to indulge our own selfish cravings?

Do we realize the seriousness of sin?  That sin leads to death? Not just physically? But spiritually? That unrepentant sin will separate us from God eternally? And result in forfeiting our heavenly home?

Filed under Passage To Ponder, Uncategorized