Word of the Week: Conversion 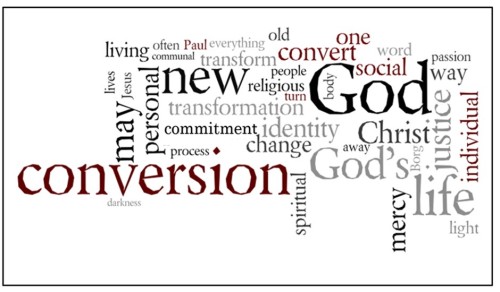 “The Scriptures were not given for our information,” wrote D. L. Moody, “but for our transformation.”

This month we’re reading the book of Acts, often called the most important book in the Bible. It records the beginning, growth, and spread of Christianity. From Jerusalem to Judea to Samaria and throughout the Roman Empire. But it is more than just a book of history. It is a book that tells thrilling stories about people. Real people. Converted people. Transformed people.

These narratives, however, are not just recorded to inform us, but that we too might be transformed. It occurred to me the other day that all these conversion accounts from Pentecost to Philip’s preaching in Samaria to Saul’s dramatic conversion to the Gentile converts like Cornelius have several common elements.

Calling. In each of these conversion accounts in Acts, people are called. But not in the way that the religious world typically considers. In every case, the gospel was preached and the Word of God was clearly annunciated. In recalling the conversion of the Thessalonians Paul wrote, “(God) called you by our gospel” (2 Thess. 2:14).

Today our calling is no different. The Word of God is alive and powerful. And it calls us to come to Him.

Choice. The preachers and apostles in Acts did not pressure people to become Christians. They were not coerced by threats. Nor enticed by carnal tactics. People either received the Word or rejected it. Some obeyed. Some didn’t. God allowed the free will of the hearers to choose.

One shouldn’t become a Christian just to please a parent, preacher or spouse. It’s a personal choice. It ought to be voluntary. A decision that’s made out of conviction.

Change. One hallmark of converted people in Acts was the decided change that occurred in their lives. Peter preached, “Repent and be converted” (Ax 3:19). Repentance and conversion involve change. The word “convert” means “to turn.” These converted people turned from idolatry. False religion. And immoral lifestyles.

One of the most dramatic stories was the conversion of Saul of Tarsus who turned from being a persecutor of Christians to a preacher of the Gospel. He became known as the Apostle Paul. And was a fierce defender of the faith.

No true conversion occurs without change. A person unwilling to change is not ready to become a Christian.

Courage. Peter, James, and John were men of courage. So was Saul who left the religion of his forefathers. And so were those who were persecuted for their faith.

It takes courage to change. To go against the crowd. To stand up for the Truth. Thus, we read numerous exhortations like the one in 1 Corinthians 16:13. “Watch, stand fast in the faith, be brave, be strong.” Like those in Bible times, we are challenged to be courageous.

Commitment. Conversion calls for commitment. Dedication. Loyalty. It is obvious that these early Christians were men and women of deep commitment to their new found faith. And to the Lord.

Becoming a Christian is not like casually joining a club in which you are a nominal, card-carrying member. And occasionally attend a few meetings. It is a lifetime commitment that requires a willingness to sacrifice. To serve. And to share your time, talent and treasure to enhance the cause of Christ.

Consecration. The most used Bible word to describe the inward change of Christians is “holy.” It is also the word translated saints. It speaks to one set apart. Dedicated to the use of Jehovah.

Christians are consecrated. But it is not merely outward actions, but an inward attitude that is changed to model the character of Christ. Holy in conduct. Speech. Dress. And relationships.

The personal and probing question for every person is “Have you been converted?” If not, the call comes today, “Repent, and be converted.”

Tagged as Conversion, D.L. Moody, Word of the Week

One response to “Word of the Week: Conversion”