Word of the Week: Glory 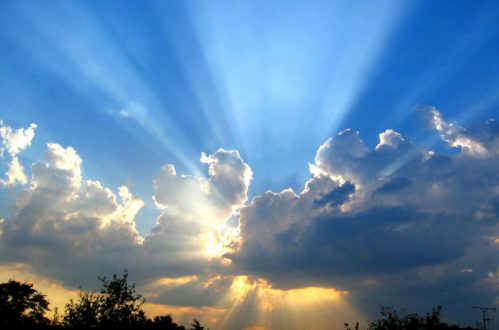 Yesterday Norma Jean and I visited the Ellisville Church of Christ in the St. Louis area. We were blessed to worship with some wonderful brethren and hear a fine lesson by Ryan Boyer and be led in an insightful study of Biblical poetry.

Ryan illustrated how the poetry adds colorful dimension to the facts of the Bible by comparing Exodus chapter 14 and 15.

Exodus 14 matter of factly describes Israel’s plight when they were leaving Egyptian bondage and were confronted with the impasse of the Red Sea. Pharaoh’s army was pursuing. And the Israelites “were very afraid.”

Moses told the people “Do not be afraid. Stand still and see the salvation of the Lord.”

Then the Lord told Moses to “go forward.” To stretch his hand over the Sea. The waters would part. And they would march across on dry land. However, when Pharoah’s army pursued, God would show them that He alone was the Lord.

Chapter 15 is the song of Moses and the children of Israel following their crossing and the defeat of Pharoah. The song graphically describes God’s power and glory.

“I will sing to the Lord,
For He has triumphed gloriously!
The horse and its rider
He has thrown into the sea.

And with the blast of Your nostrils
The waters were gathered together;
The floods stood upright like a heap;
The depths congealed in the heart of the sea.

Glory describes God’s greatness.  His honor.  Splendor. Dignity. Brightness. And reputation. God is glorious. In power. In strength. In holiness. And in victory over our enemies.

The Psalmist often poetically proclaims the glory of God as seen in the splendor of creation through the sun, moon, and the stars. And very often His glory as demonstrated by triumph over the troubles we encounter.

When we face the Red Sea of fear, doubt, and desperation. God is there. Even when we have difficulty in believing and are filled with feelings uncertainty, skepticism, and anxiety, God can remove the obstacles and suddenly provide a sure and safe path for us to follow.

I’ve experienced it my life. You’ve seen it in others. And maybe you have too. An unexpected problem, loss or hardship appears insurmountable. It burdens our hearts. Troubles our minds. Overwhelms our spirits. Taxes our resources. The enemy is closing in. What will we do?

Then God appears. Help has arrived. The answer becomes obvious. The problem is solved. And if we’re spiritually aware and attuned to what has happened, God is glorified.

I’m reminded of the words of the poet and songwriter, Annie Flint Johnson, who experienced many sorrows in life, yet was strong and faithful.

He giveth more grace when the burdens grow greater,
He sendeth more strength when the labors increase;
To added afflictions He addeth His mercy,
To multiplied trials, His multiplied peace.

When we have exhausted our store of endurance,
When our strength has failed ere the day is half done,
When we reach the end of our hoarded resources
Our Father’s full giving is only begun.

In the words of David who experienced God’s glory so many times, “On God rests my salvation and my glory; my mighty rock, my refuge is God”(Ps. 62:7).

Tagged as Glory, Word of the Week

2 responses to “Word of the Week: Glory”