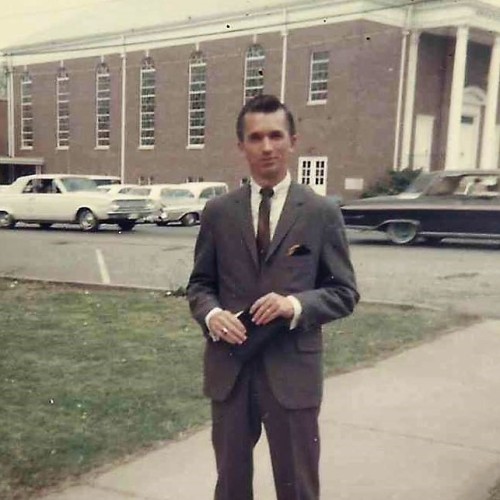 This morning while reading Revelation chapter 11, I had a flashback down memory lane. One that first produced a slight chuckle in the early morning darkness. Then a warm feeling inside. And then some personal introspection.

Verses 11 and 12 reminded me of a sermon I heard Robert Jackson preach 50 years ago.   Of course, I may remember it so well because l “borrowed” and preached it several times in my early days of ministry.

Revelation is a symbolic book that depicts the conflict between God and Satan; between good and evil; and the church and the Roman forces of paganism. It is a divine message that assures us Truth will triumph over error. That God’s people will win the war against the Devil. And to remain faithful even in the face of extreme persecution.

In a powerful scene in chapter 11 where the two witnesses are martyred for the cause of Christ, we read these encouraging words.

And after three days and a half the Spirit of life from God entered into them, and they stood upon their feet; and great fear fell upon them which saw them. And they heard a great voice from heaven saying unto them, Come up hither. And they ascended up to heaven in a cloud; and their enemies beheld them.

In Robert’s sermon, he reminded us that voices are calling yet today. There are voices calling us down. Voices that are alluring and enticing. Voices that tempt us to enjoy “the pleasures of sin for season.” Voices that make sin look good. But the wise man reminds us “My son, if sinners entice you,
Do not consent” (Prov. 1:10).

Then Robert in his unique and powerful presentation encouraged us to listen to the voices that call us to “come up hither.”

The great voice of God calls, “come up hither.” He speaks from his inspired Word. He calls us to come out from a world of sin and be separate (2 Cor 6:17-18). He provided a path for salvation. He does not want you to be lost. He desires that you ascend to heaven and be with him for eternity.

The great voice of Christ calls. “Come to Me, all you who labor and are heavy laden, and I will give you rest” (Matt 11:28). He came to earth to be the sacrifice for our sins. And He’s ascended to the right hand of God and now rules and reigns as Lord of lords and King of kings. His entire earthly ministry was about our salvation. He wants you to “come up hither.”

The great voice of the Spirit calls us. Not in some mystical manner. Not in a still, small voice in your heart. But through the Word given to the apostles and written for all of us to read. At the end of John’s revelation he wrote, “And the Spirit and the bride say, “Come!” And let him who hears say, “Come!” And let him who thirsts come. Whoever desires, let him take the water of life freely” (Rev. 22:17).

I’m amazed at those today who denigrate the Lord’s church. It is simply God’s called out people. It’s sinners saved by grace who care about those lost in sin and call them to come to Christ.

The voices of great saints who’ve gone on to their reward also call “come up hither.” John the Immerser who was beheaded. Stephen who was stoned to death. James who was murdered by Herod’s sword. The “cloud of witnesses” in Hebrews 11 like Abel, Abraham and Moses who remind us that it pays to serve God by faith. “Come up hither”’ they call.

Whose voices are you listening to?

In the words of the hymnist, Jessie B. Pounds

The voice of the Savior says, Come;
The cross where He died is in sight;
E’en now at the cross there is room;

The voice of the Father implores
From mercy’s most wonderful height;
His love in that call He outpours:

The voices of friends gone before
Seem floating from regions of light;
They tenderly say o’er and o’er,
Are you coming to Jesus tonight?

13 responses to “Voices That Call”