Word of the Week: Civility 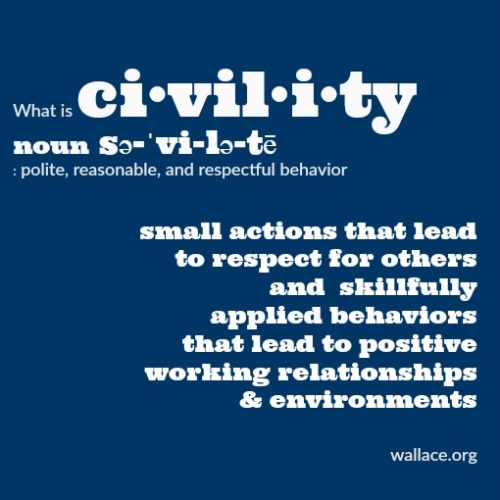 During the past month on the road, we have not been watching very much TV, especially here in the Smoky Mountains. Except for a bit of morning news and an occasional Hallmark movie at night Norma Jean and I have preferred the beauty and serenity of our surroundings.

However, we have seen enough to long for the mid-term elections to be over. The political ads and the rhetoric is heated and vitriolic on both sides. Now in the aftermath of the terrible mass shooting at the Philadelphia synagogue, there are renewed calls for civility among our political leaders.

Civility is defined as “formal politeness and courtesy in behavior or speech.” Civility involves graciousness. Good manners. Consideration. And respect. It is witnessed in words and deeds that reflect affability, amiability, and geniality.

Over the past few years, the national media has reported an increasing lack of civility in society. While we may have a greater awareness of the incivility of vulgar expressions, barnyard humor, and pejorative terms, the problem is not improving, but only waxing worse.

Crude, crass and coarse speech is on the rise. Guilt is observed in every segment of society. Star athletes. Famous movie stars. TV talk show hosts. News commentators. And politicians. And unfortunately, sometimes among Christians.

Incivility is not just a political problem, but one we must all deal with in our homes, churches, and neighborhoods. Too often uncivil attitudes are on public display as people insult each other on facebook. Sadly, even among brothers in Christ.

While the word “civility” is not found in the Bible the concept is definitely taught in various passages.

In the great love chapter, I Corinthians 13, Paul wrote that love “does not behave rudely.” The J.P. Philips translation renders it “love has good manners.” Yes, civility is an expression of the second great commandment “love your neighbor” (Matt 22:39).

The Bible exhorts Christians to be concerned about their conversations with non-Christians with these words: “Let your speech always be gracious, seasoned with salt, so that you may know how you ought to answer each person” (Col 4:5).

Furthermore, we are commanded, “Do not let any unwholesome talk come out of your mouths, but only what is helpful for building others up according to their needs, that it may benefit those who listen” (Eph 4:29).

The Preacher was right when he wrote, “Words from a wise man’s mouth are gracious, but a fool is consumed by his own lips” (Eccl 10:12).

Yes, “you must rid yourselves of all such things as these: anger, rage, malice, slander, and filthy language from your lips” (Col 3:8).

The Bible is clear. It is “improper for God’s holy people” to engage in “foolish talk or coarse joking, which are out-of-place.” (Eph 5:2).

All of these passages point to edifying discourse that is measured, charitable and decent. Crude, coarse, and crass expressions of anger or antipathy toward others are not only inappropriate but unholy in the eyes of God.

We may not be able to do much to impact our national mood that is accusatory and uncivil, but each of us can begin with ourselves. In our homes. In the workplace. And on social media.

Certainly, among brethren who share the same spiritual blessings and enjoy a commonality in Christ, we can show the world a different spirit. The attitude that compels us “to be kind to one another” breeds civility.

In his Presidential inaugural address, the late John F. Kennedy spoke the truth when he said: “Civility is not a sign of weakness.” And in the words of former President George W. Bush, “Civility is not a tactic or a sentiment. It is the determined choice of trust over cynicism, of community over chaos.”

Finally, one anonymous sage put it this way, “In a world where you can be anything, be kind.”

2 responses to “Word of the Week: Civility”