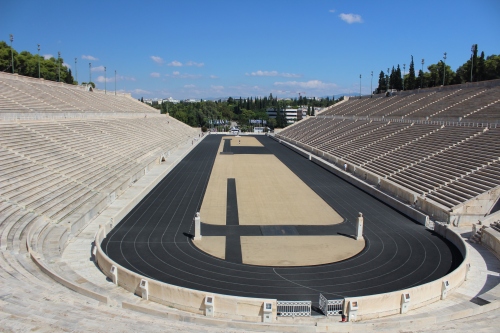 Yesterday Norma Jean and I toured the Panathenaic Stadium, a multi-purpose stadium in Athens, Greece. It is the only stadium in the world built entirely of marble.

Originally  built in the 4th century B.C., it was rebuilt in 144 B.C. in marble by  Herodes Atticus, an Athenian Roman senator. After the 4th century it was abandoned until excavated in 1869 and hosted the Zappas Olympics in 1870 and 1875. After being refurbished, it was the site of the first modern Olympics in 1896.

I couldn’t help but wonder if the Apostle Paul visited this Stadium on his trip to Athens in Acts 17. Whether Paul would attend such events or was even a sports fan is subject to debate by the scholars. However, it is obvious that the apostle was fond of using the running metaphor in several of his letters, including Hebrews, Timothy, 1 Corinthians and Philippians. The analogy speaks to virtues needed to Christian faithfulness such as strength, discipline, endurance, suffering, patience, faith, encouragement, and hope.

Do you not know that those who run in a race all run, but one receives the prize? Run in such a way that you may obtain it. And everyone who competes for the prize is temperate in all things. Now they do it to obtain a perishable crown, but we for an imperishable crown. Therefore I run thus: not with uncertainty. Thus I fight: not as one who beats the air. But I discipline my body and bring it into subjection, lest, when I have preached to others, I myself should become disqualified. (1 Cor 9:24-27).

The Christian life is a spiritual marathon. Not a sprint. It requires a lifetime of dedication. Devotion. And doggedness. It’s not always easy. Convenient. Or popular. But the true disciple of Jesus is not deterred. Dismayed. Or distracted.

Running, like the Christian life, requires self-discipline. It is necessary to forego pleasures that others engage in. Some that may be harmful. And others that are not necessarily wrong, but may hinder your health and fitness.

A runner must endure aches. Pains. Strains. A dedicated runner persists in hot weather. Cold weather. Rainy weather. When he feels good. Or bad. Or just blah! He runs! He runs with purpose. Passion. And perseverance.  The Christian race requires that same self-control.

Running, like discipleship demands focus. Attention. And single-mindedness. You must keep your eye on the goal. And pay careful attention to what you are doing.

In a race, there is one winner. And the ancient prize was a laurel wreath crown on their head. It was perishable. It would soon wither. And waste away. The Christian crown is imperishable. It is eternal life. And all who complete the race will receive the prize.

One other thing occurred me yesterday as we listened to the narration, and walked through the tunnel that entered the massive stadium, seating over 60,000 spectators. Just like the ancient athletes were cheered on by their fans, we have “a cloud of witnesses” now in heaven watching us run (Heb. 12:1-2.)

There are previous winners (Heb 11) that witness your struggle. Abel. Noah. And Abraham. As well as Moses, Joshua, David and many others. They are like spectators in the stadium cheering us on. They bear witness to us through the Word that it pays to serve God. To follow Him. And to be faithful regardless of the consequences.

Like these ancient athletes, don’t allow anything to hold you back. Slow you down. Or sidetrack you. Remove every weight. Let go of every obstacle. Suppress every desire that hinders your progress.

Those who have gone before are rooting for you to finish. They’re saying, “You can do it.” “It pays to serve God.” “Keep running the race.”

Listen. Don’t you hear them? They’re cheering you on. They’re shouting “Don’t give up.” “Don’t give in.” Don’t give out.”

One response to “Running the Christian Race”