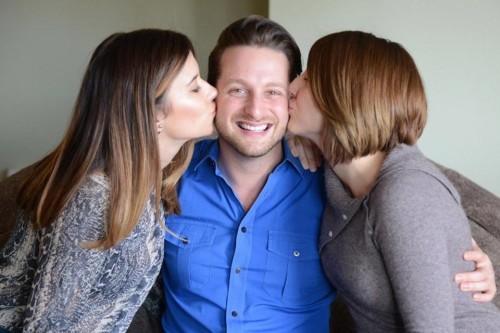 Adam Lyons says he’s “the luckiest man alive.” Why? Because the Londoner living in Austin, Texas,  shares his life with two girlfriends, Brooke Shedd and Jane Shalakhova who are bi-sexual.

Lyons, the father of Shedd’s, 2 year old , Dante, is now expecting a baby boy with Shalakhova. The May 18th New York Post article extols their relationship called a “throuple.” The three share parenting duties as well as the same bed. They’re quoted as saying “For us, three definitely works better than two.”

The article suggests that this could be the future of relationships and parenting. Although they hope one day they could all be legally married, Lyons, Shedd and Shalakhova admit they still would like to involve a fourth partner in their sex life.

Lyons said: “We are still open in our relationship and we do sleep with other people outside the three of us.”

Some of us said when the definition of marriage was changed to include same-sex partners, it would open the doors to almost any kind of arrangement. If there is no moral standard, why not?

“When you affirm homosexual unions, logically you have to affirm this polyamorous arrangement,” observed Robert A. J. Gagnon, Associate Professor of New Testament studies at Pittsburgh Theological Seminary. “ It is the male-female binary foundation for valid sexual relationships that definitionally establishes the inherent duality of the sexual bond.”

Gagon further reasons, “If one dispenses with this foundation, one necessarily (whether consciously or not) dispenses with a limitation of two persons to a sexual union at any one time. Holdover retention of the latter must then be deemed irrational prejudice. You have already swallowed the camel; why choke on the gnat? On the other hand, if you recognize the immorality of polyamorous arrangements, perhaps you should rethink your embrace of homosexual relationships that eliminate a male-female requirement.”

For 5,000 years of Judo-Christian history, we have understood the principle of marriage ordered and ordained by God in the beginning as “male and female” (Gen. 1:27). Jesus affirmed the Genesis account with this explanation to the Pharisees.

“Have you not read that He who made them at the beginning ‘made them male and female,’ and said, ‘For this reason a man shall leave his father and mother and be joined to his wife, and the two shall become one flesh’? So then, they are no longer two but one flesh. Therefore what God has joined together, let not man separate.” (Matt 19:4-6)

The Austin “throuple” said “three people and three parents makes so much sense to us.” So, they have rejected God’s plan. Discounting, that as the Creator,  He has the right to define marriage. God said that marriage is between two people, not three.

In another article by John Shore in Patheos, he interviewed a woman in a Polyamorous relationship. She not only defended the relationship but felt that “God is blessing us.” She said it felt “nice.’ “Perfect.” “Healthy.” “Just right.”

This anonymous woman who considers herself married to both a man and woman admitted, “When I think about my relationship as a three, I mostly just feel incredibly lucky, like God is smiling at us.”

When morality becomes subjective to feelings, whims and carnal passions, there is no end to what one can justify and even celebrate. The God I know is not smiling at this putrid moral mess.

ThePreachersWord is not naive enough to think our little blog will do much to stem the tide. But hopefully it’s a solemn reminder to followers of Jesus to remain pure in a sordid society. And to teach our children and grandchildren that we cannot be conformed to this world, or influenced by its redefinition of moral values (Rom. 12:1-2).

9 responses to “Redefining Marriage: Are Three Better than Two?”