CAN GOD FIX THIS? 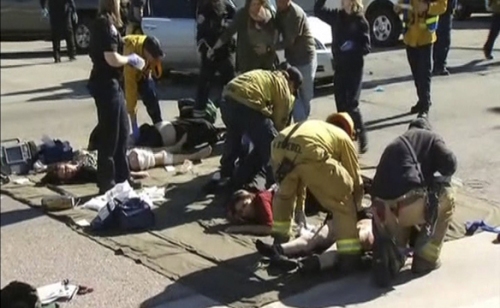 The subheading said, “As the latest bunch of innocent Americans are left laying in pools of blood, cowards who could  truly end gun scourge continue to hide behind meaningless platitudes.”

The “meaningless platitudes”? Tweets of 4 Republican politicians offering their prayers for the victims, their families and the people of San Bernardino are featured on the front page. The inside article mocks them and others for evoking the name of God instead of doing something about stricter gun laws.

But the Daily News wasn’t alone in their ridicule. Following tweets that the “thoughts and prayers” were with the people of San Bernardino, numerous others responded like these:

“Another mass shooting. Another deluge of tweeted prayers. Seems to have been an ineffective strategy so far.”

“Dear thoughts and prayers people: Please shut up and slink away. You are the problem, and everyone knows it.”

It’s incredible in the midst of tragedy, suffering and death, when the families were requesting prayers, that people would mock those who prayed. But, sadly, it is the sign of our times.

The insinuation of the Daily News and the Tweeters was insensitive, incorrect and absurd. What are they saying? There is no God? Or God doesn’t care? Or God is incapable of acting? Or prayer is useless?

(1) Prayer is not some kind of magic formula to recite when we are in trouble.

A “genie God” is not going to mystically appear, wave a wand and eliminate all human suffering. Prayer is conversation with the Almighty. It is our means of petition, supplication and request to the Creator when we have concerns and feel hurts. The Bible says God hears our prayers and that He cares about our problems. (I JN 5:14; I Pet. 5:6-7).

(2) Before doubting God, or mocking the fervent prayers of righteous people, critics should remember that neither God nor Christianity is the problem.

(3) It is not God’s fault that people engage in evil acts.

The problem in this world is the same as it was in ancient Israel and in the days of Jesus Christ. It’s the sin problem. When evil enters the heart and its plans are conceived, sin occurs. Jesus said, “For out of the heart come evil thoughts, murder, adultery, sexual immorality, theft, false witness, slander” (Matt 15:19). That’s not God’s fault!

Yes, He can, but not in the way most of the world wants.

First of God, has provided a “fix for sin” through Jesus Christ. He lived, died and was resurrected that we might be free from the slavery of sin and the evil desires incited by the devil. Jesus calls us to a higher standard of living. His gospel does not prompt people to murder unbelievers or hurt others. Both the golden rule and the second great commandment can change hearts and alter behavior. (Eph. 1:1-23; Matt 7:12; Matt 22:37-40).

Secondly, in His providence God can use evil people and nations to punish His people or nations for their unfaithfulness to His Word. Old Testament history records that God used Israel to punish the Canaanites, Assyria to punish Israel, and Babylon to punish Assyria, as well as Judah (Jer 18:5-11). This is not a very pleasant or popular thought, but it is a possibility based on Scripture.

Thirdly, the problem of evil will be solved “in the day of the Lord.” Christ is coming again. This world will be destroyed. And judgment will be justly rendered according to our deeds, both good and evil (I Pet 3:9-12; 2 Cor 5:10).

As long as the world stands, there will be evil, injustice and corruption. But God has prepared a better world. One that awaits the Believer. We will never correct all of society’s ills, but we can prepare the soul for its eternal home.

7 responses to “CAN GOD FIX THIS?”