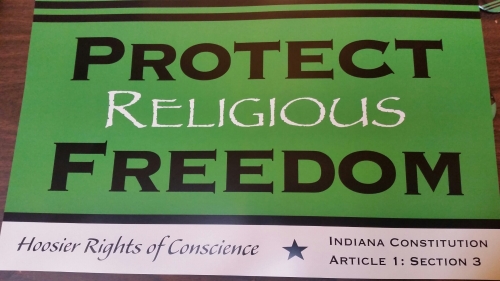 When I was a kid growing up in Indiana the incredible excitement surrounding basketball, especially the High School basketball tournament, was called Hoosier Hysteria.

The passion for the game stemmed in part from the inclusion of all schools in a single class tournament where a smaller rural school might knock off a big city giant. Like Milan did in 1954 when they defeated Muncie Central. Incidently, the movie Hoosiers was based on that game.

However, it seems Hoosier Hysteria has changed. Not just in the game of basketball, but in the passion coming from the state of Indiana. Almost unbelievably the rage is over the “Religious Freedom Bill” signed by Governor Pence and how it might somehow negatively impact homosexuals!

Since Indianapolis is hosting the NCAA Final Four, this issue has been front and center in the news. Every day. Every station. By everyone! Celebrities, companies, politicians, as well as state and local governments have condemned the legislation.

Author Stephen King called the bill “gay discrimination.” New York Mayor, Bill deBlasio opined it was “disgraceful.” Former NBA great and sports analyst, Charles Barclay said, “Discrimination in any form is unacceptable to me.” He then said the Final Four ought to be moved from Indianapolis. Apple CEO, Tim Cook, in an Op-Ed for the Washington Post, strongly opposed the bill calling it “dangerous” and “discrimination wrapped in the cloak of religiosity.” Even Miley Cyrus took to Twitter and called Governor Pence a name we can’t repeat here.

The hysteria is ridiculous, and is trumped-up by far-left progressives with a social agenda bent on redefining marriage, normalizing aberrant behavior and attacking the personal religious beliefs of Christians.

It is well documented that 19 other states, including Florida, Missouri and Texas have bills very similar to the one passed in Indiana. Illinois has such a bill that Barack Obama voted for in 1998 when he was a state Senator! In 1993, President Clinton signed a federal RFRA bill that shares similar language as all 20 states. As the Washington Post correctly writes, “It prohibits the government from “substantially burdening” individuals’ exercise of religion unless it is for a “compelling government interest” and is doing so in the least restrictive means.”

In reflecting on the hysteria surrendering the Freedom of Religion bill and the hand wringing over its supposed consequences, consider these thoughts.

Our forefathers came to this land seeking freedom of religion. That basic right founded in the Declaration of Independence and the Constitution is under severe attack today. I am accused of being intolerant for holding conscientious, Bible beliefs regarding morality, sexuality and marriage. Where is the tolerance for my Christian faith?

Why do homosexual activists want to shut down businesses operated by Christians, like florists, bakeries and photographers because their faith will not allow them to participate in celebrating same-sex marriages? Is there no other business that will oblige them? Or is it a means to push their propaganda?

As a preacher of the gospel of Christ, I am exempt from performing same-sex marriages, at least so far. Why not the Photographer? The Caterer? And the Wedding Planner?

As my friend, Wilson Adams, posted on facebook this Hoosier Hysteria “is a phony firestorm driven by the homosexual agenda.”

As Christians, let us remain faithful to God’s Word. Let us exercise our freedom in Christ, but never use it as a license to disrespect or demean others, regardless of our opposition to their beliefs or lifestyle.

May we speak the Truth. Yet, declare it with love. Let us share the gospel who are in desperate need of God’s saving grace. And may we be guided by Peter’s bold response to the authorities, “We ought to obey God rather than men.” (Acts 5:29)