IT’S FRIDAY. BUT SUNDAY’S COMING! Hail To The King! 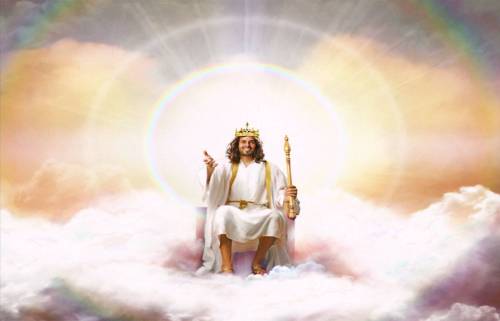 “Your King lacks class! No one will follow him. A king has to have flair and style. He has to arouse feelings of pride and prestige. People have to identify with him. They must be able to say, ‘His prowess is my prowess and his glory is my glory!’ He has to have dignity and a certain aloofness. He has to know how to carry his crown and flash his sword in the sun.

The least a king can do for his subjects is ride a spirited steed! What will you answer when men ask for your king? ‘He’s over there on that donkey with his sandals dragging on the ground.’ Ha! I’ll lay you ten to one, no one will ever follow him!”

These words from a character in Wilbur Ree’s book $3 Worth of God capture the attitude of the religious leaders toward Jesus. They were looking for a King in the spirit of David or Solomon. A King to restore Israel to greatness. A king to overthrow the yoke of Roman rule. A King with physical and political splendor, greatness and glory.

The Pharisee’s disdained Jesus’ as “the carpenter.” He had no formal training at their schools. No credentials. And no social, political or religious standing or status. Seriously, “can any good thing come out of Nazareth”? A King? Hardly!

Even the apostles did not understand. Peter even rebuked Jesus for going to Jerusalem to die (Matt 16:21-23). Later he would rebuff Jesus’ humble offer to wash his feet (John 13:6-8). It is apparent that their understanding of the kingdom and his Kingship was fuzzy at best.

Yet, Jesus came and fulfilled the Old Testament prophesies concerning the Messiah and the coming Kingdom. In his triumphal entry into Jerusalem, John records it this way.

“The next day a great multitude that had come to the feast, when they heard that Jesus was coming to Jerusalem, took branches of palm trees and went out to meet Him, and cried out:

“Hosanna!  Blessed is He who comes in the name of the Lord!’  The King of Israel!”

This celebratory scene fulfilled Zechariah’s prophecy. John says, “His disciples did not understand these things at first; but when Jesus was glorified, then they remembered that these things were written about Him and that they had done these things to Him.”

By Friday the mood changed. The plot of the Pharisees had come to fruition. Jesus must be killed. For the good of the nation (John 11:47-53). He would never be a King, they thought. And when Jesus died the evil schemers believed their “problem” was solved.

But they didn’t know Sunday was coming!

Following the sightings of Jesus on Sunday, they must have pondered Pilate’s question to Christ, “Are you a King?”   And his response must have seemed surreal as they recalled his words:

“You say rightly that I am a king. For this cause I was born, and for this cause I have come into the world, that I should bear witness to the truth. Everyone who is of the truth hears My voice.”

The resurrection demonstrated his Deity. In his ascension back to heaven He was coronated as King. And when Peter took “the keys of the Kingdom” and opened the door to it’s first citizens on Pentecost, His reign began at the right hand of the Father.

Paul would later proclaim Jesus as “the blessed and only Potentate. The Lord of Lords, and the King of Kings!”(1 Tim. 6:15).

Sunday’s coming. Don’t miss an audience with the King.

Oh, and one day the King is returning to claim His chosen citizens. You definitely don’t want to miss being in that number!

Tagged as It's Friday. But Sunday's Coming

One response to “IT’S FRIDAY. BUT SUNDAY’S COMING! Hail To The King!”