Which Road Will You Take? 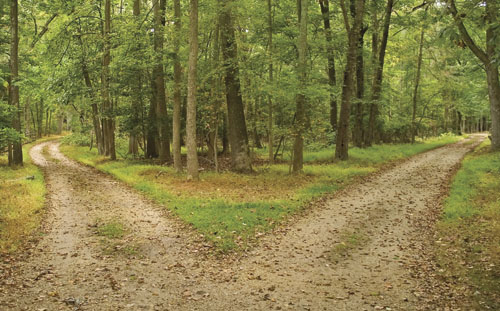 We are in the heat of baseball season.  Literally!  This year the All-Star game is coming to Kansas City.  Norma Jean and I were down on the Plaza Friday night and noticed it is filled with All-Star information.  Signs.  Promotions.  Pictures.  You name it.  One of my favorite Baseball All-Stars was Yogi Berra.

Stan Mitchell in Forthright Magazine observed that the New York Yankee had a “distinguished career, but he is probably better known for his quirky, intentionally (we think) wise sayings.”

“His malapropisms were funny, true, and disarming. It was he who declared of a close, competitive game, “It ain’t over ’til it’s over.” Of course, he was right.

One time when asked what time it was he is supposed to have responded, “You mean now?” “It is,” he once declared, “déjà vu all over again.”

One of my favorites, however, is the following: “Never answer an anonymous letter.” Which of course raises the obvious question: If the letter was anonymous, where would you send it? Do anonymous letters include a self-addressed envelope for replies?

One of his most famous sayings was ” When you come to a fork in the road … take it.”

Of course, Berra was saying this in jest, with a twinkle in his eye, but how true to life his statement is.”

Unfortunately, we live in an age where folks are lost.  They don’t know where they are going.  Morally.  Ethically. Spiritually.  They are lost because they came to a fork in the road and had no idea which way was a good way.  The right way. Or righteous way.

To those in Jeremiah’s day, Jehovah exhorted, “Thus says the Lord: “Stand in the ways and see, And ask for the old paths, where the good way is, And walk in it; Then you will find rest for your souls.” (Jer 6:16).

God’s way is the good way.  The right way.  The peaceful way.  The way in which the soul can find solace.  The wise man expressed it these words, “He guards the paths of justice, And preserves the way of His saints. Then you will understand righteousness and justice, Equity and every good path.”

Too often people react to their emotions.  They are driven by their feelings.  By pleasure.  By pride.  By ambition.  Again, the author of Proverbs is right on when he wrote, “There is a way that seems right to a man, But its end is the way of death.”

But most people are mistaken.  It does make a difference.  Jesus said, “I am the way, the truth, the life.  No man comes to the Father except through me.”  Those who have taken the Jesus road can echo the words of Robert Frost, “Two roads diverged in a wood, and I took the one less traveled by, And that has made all the difference.”

One response to “Which Road Will You Take?”