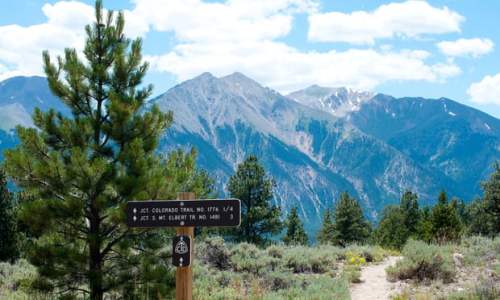 Being in the mountains, this headline on my phone from The Guardian caught my attention:

A Colorado man was hiking on Mount Elbert and lost his way around nightfall. He said he “bounced around on to different trails trying to locate the proper trailhead.”

When he was reported missing around 8pm, repeated calls to his cell phone went unanswered because the hiker didn’t recognize the number and reportedly had “no idea” anyone was looking for him.

Two rescue teams over a period of 36 hours combed the area and constantly called to his number only to learn later that the hiker had returned to his place of lodging the next morning at 9:30.

The Lake county search and rescue team responded with this facebook message:

“If you’re overdue according to your itinerary and you start getting repeated calls from an unknown number, please answer the phone; it may be a search and rescue team trying to confirm you’re safe.”

Fortunately, this story had a happy ending. The lost hiker found his way home and was safe.

Unfortunately, many people in this world today are spiritually lost. They are bouncing around from trail to trail. From one place to another. To various adventures, experiences, and experiments. They’re lost. But they don’t know it.

God is calling, but they don’t hear. Or heed. Or recognize the number. God has revealed Himself through two books–the book of nature, and the book of special revelation called the Bible.

Yesterday, we visited Dollywood, which was decorated with pumpkins and accompanying adornments of this season. Among the various signs was this message from Dolly Parton.

“Fall just speaks to my heart this time of year. God’s splendor brings a beautiful kaleidoscope of color to the Smoky Mountains.”

Actually, every season and all of nature proclaims, “There is a God.”

In Romans 1, the apostle Paul said the Gentile world was condemned because they rejected the knowledge of God, even though His power, invisible attributes, and Godhood were revealed in the Creation (Rom. 1:18-23).

The Psalmist proclaimed, “The heavens declare the glory of God, and the sky above proclaims his handiwork” (Ps. 19:1).

“For the Lord is the great God, the great King above all gods. In his hand are the depths of the earth, and the mountain peaks belong to him. The sea is his, for he made it, and his hands formed the dry land” (Ps. 95:3-5).

George Washington Carver expressed it well when he wrote, “I love to think of nature as an unlimited broadcasting station, through which God speaks to us every hour if we will only tune in.”

But God didn’t stop there. He sent His Son on a rescue mission to earth to redeem and reconcile lost and fallen humankind. Once on a mountain top, God instructed Peter, James, and John to hear the voice of Jesus. “This is My beloved Son, in whom I am well pleased. Hear Him!” (Matt. 17: 5).

Jesus came not only to show us the way to the Father (Jn. 14:6), but to leave a written record of His will through the revelation of the Holy Spirit (Jn. 16:13). Paul affirmed that he received it, and succinctly wrote it in words we can understand (Eph. 3:3-5).

How many people have Bibles in their possession that go unopened, unread, or unheeded?

God’s call, of course, comes through the gospel. The apostle reminded the Thessalonians that God “called you by our gospel” (2 Thess. 2:13-15). That is still true today. “Faith comes by hearing and hearing by the Word of God” (Rom. 10:17).

Through the technology of the internet and live streaming, the message of the gospel is more readily available than at any time in history. However, many if not most lost people, don’t know that God is looking for them. Others who were once saved, have wandered away. Lost their way. And are bouncing around from place to place.

God wants you to be found. Safe. And saved.

3 responses to “An Unrecognized Call”