Honoring and Remembering Our Veterans 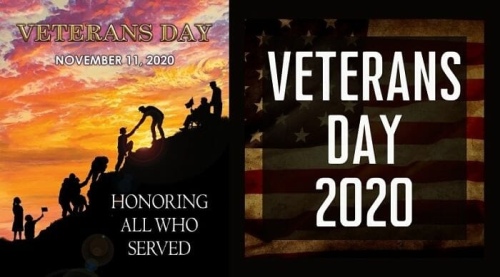 In November of 1919, President Woodrow Wilson proclaimed November 11 as “Armistice Day.”  It was hailed as a day of reflection to honor those who served in the military, both living and dead, at the end of World War I.

While the Treaty of Versailles was not signed until seven months later, the fighting ceased between the Allied nations and Germany on the 11th hour, of the 11th day, of the 11th month.

The Bible teaches that it is proper to accord “respect to whom respect” is due and “honor to whom honor” is deserved as it relates to civil government. Both apostles Peter and Paul spoke to that issue (Rom. 13:7: 1 Pet 2:17).

Those who have served our nation in the military are worthy of recognition. They have fought for freedom. Provided security. Kept the peace. Secured liberty. And protected our rights.

In 1921 The United States laid to rest an American soldier, “his name known only to God”, on a Virginia hillside overlooking Washington D.C. and the Potomac River. The site was called “The Tomb of the Unknown Soldier” which is located in Arlington National Cemetery, where there will be a special wreath-laying ceremony today by President Trump and the First Lady.  

The “Tomb of the Unknown Soldier” reminds us of many who’ve served who are indeed unknown. Famous Generals have found their way into the history books. They are American heroes. We name schools, streets, and buildings in honor of them. Yet, it is the many “lesser-known” soldiers who have fought, sacrificed, and served to keep our country safe.

There are brothers and sisters in Christ who have answered their country’s call to serve. And while serving our nation, they have also served and honored the Lord. These “Christian soldiers” especially deserve our respect and appreciation.

Too often in our country today men and women of our military are disrespected. Sometimes even among Christians who seem to have an issue with the military. It might be well to remember that the first Gentile convert, Cornelius, was a Roman soldier. I don’t read where Peter told him to resign from the military if he wanted to be a Christian.

Furthermore, the Bible uses military metaphors to identify Christians and our mission. Christians are called soldiers. (2 Tim. 2:4). Paul called Epaphroditus a “fellow soldier.” (Phil 2:25). Ephesians 6:10-18 identifies the armor of the “Christian soldier” to prepare us for battle against our archenemy–Satan. However, our warfare is not carnal. It is spiritual (2 Cor 10:4).

This analogy reminds us of the veterans of Faith. Those who have steadfastly served in the Lord’s army for many years. Who have fought the good fight. Kept the faith. Finished the course. And gone on to their heavenly reward.

We are indebted to the heroes of faith dating back to the apostles who were persecuted. Beaten. Stoned. And martyred. They received the Word. Spread the gospel. And laid a foundation for future Christians to build upon. Through succeeding generations, there have been those men and women who were true to The Word. Stood for Righteousness. Shared their faith. And left a spiritual legacy for their children and grandchildren.

I am a Christian today because of those Christian soldiers. My Granny Key was such a soldier. Her faith was passed on to my mother, my father, to me, and to our children. And hopefully one day our grandchildren.

I fondly think about veteran preachers who have made a difference in my life, who’ve gone on their reward. Aude McKee who mentored me. Harry Pickup, Jr. who encouraged me. Robert Jackson who inspired me. James P. Miller who motivated me. John Clark who challenged me. Rufus Clifford, Sr who supported me. And men like Roy Cogdill, Clinton Hamilton, James Hodges, James R. Cope, Edgar Srygley, Harry Payne, Sr., Homer Hailey who taught me, and the recently deceased Raymond Harris who befriended me.

I think of other living veterans of faith who have influenced me either directly or indirectly who are in the twilight years of their service. Men like Dee Bowman. Paul Earnhart. Ed Harrell. David Tant. Melvin Curry. Sewell Hall. Harold Comer. And Bob Owen.

These veterans of the Faith and so many others have provided opportunities where we can worship God. Do His work. And enjoy the blessings of solid, sound, faithful congregations.

And then I think of all the “unknown soldiers” of Christ in little towns and small churches across America and the world. Men and women known only to their local communities. Many largely forgotten. Yet they stood for Truth. Opposed error. Loved the Lord. Let their light shine. Served their church Family. Shared their faith. And quietly walked with Jesus with no fanfare or desire for recognition.

And so on this Veterans Day, thank God for the American soldier. They deserve our honor. But don’t forget the Veterans of Faith, who have waged spiritual battles so we can enjoy freedom in Christ.

2 responses to “Honoring and Remembering Our Veterans”