Word of the Week: Righteousness 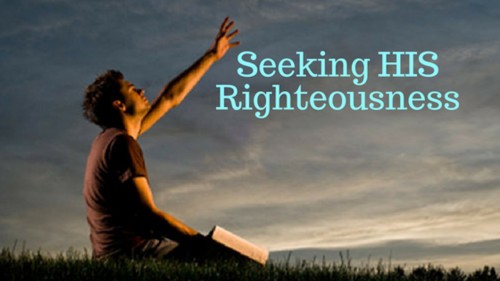 I am told that the Chinese character for righteousness is composed of two separate symbols. One is a lamb. And the other is for me.

When the “lamb” is placed directly above “me” it forms a new character, “righteousness.”

This powerful picture reminds me that I cannot attain righteousness by myself, through my good works, or by my own merit. Real righteousness is found only in “the lamb of God who takes away the sin of the world” (Jn 1:29).

Too often people think of righteousness religiously only in terms of self-righteousness. In fact, even to follow the Biblical commandment to “pursue righteousness” is in the eyes of some seeking a “holier than thou” attitude. It is true, as Charles Spurgeon expressed it, “The greatest enemy to human souls is the self-righteous spirit which makes men look to themselves for salvation.”

Legal righteousness is justification that brings us into a right relationship with God. Since “all have sinned and fall short of the glory of God” our justification can only be received “by His grace through the redemption that is in Christ Jesus” (Rom. 3:23-24).

Moral righteousness speaks to our conduct that arises out of character that imitates Christ which manifests itself in a life-style that honors God. It has to do with virtue. Integrity. And right thinking, feeling and acting.

Social righteousness reaches out to mankind. It seeks justice, equality, and fair treatment for everyone. Jew and Gentile. Black and white. Hispanic and Asian. Rich and poor. Since “all are one in Christ Jesus,” we share in each others sorrow and bear one another’s burdens.

In a world that has lost its way, and in a society that is crumbling under the weight of self-interest, political posturing, and carnal desires, people need to hear and heed “the word of righteousness” (Heb. 5:13). Christ is the answer, and the gospel is the message for a sin-sick world. It always has been. And always will be.

John MacArthur, was right when he wrote, “A righteous identity must issue in righteous behavior. Such behavior is the outward manifestation of the inward transformation, and it is the only sure proof that such transformation has taken place.”

2 responses to “Word of the Week: Righteousness”