Word of the Week: Dignity 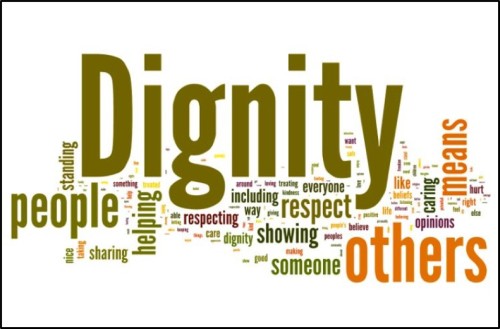 Sunday there began a call from several theologically diverse religious groups to pray for “political civility” during the 2020 Presidential election, which will occur exactly one year from yesterday.

Identified as “Golden Rule 2020: A Call for Dignity and Respect in Politics,” the prayer campaign is overseen by the University of Arizona’s National Institute for Civil Discourse and Theo Brown, the director for their Faith-Based Programs.

In a recent interview with The Christian Post Brown pointed out that the use of the Golden Rule is a way to promote civility and dignity. “Each individual person — regardless of their political views — is someone created in the image of God. Therefore, each person is worthy of being treated with dignity and respect.”

“The goal of Golden Rule 2020.” Brown said, “is to remind Christians that our faith has something to say about how we talk to each other and that these insights are relevant to our political discussions — particularly in difficult times like these.”

Our word of the week is dignity.

Dignity is defined as “bearing conduct, or speech indicative of self-respect or appreciation of the formality or gravity of an occasion or situation.” It suggests “nobility or elevation of character.” It involves worth. Value. And significance.

Dignity issues itself in decency and decorum. Grace and good taste. Self-respect and respectability toward others.

Brown’s goal is a worthy one. Yet, we know the presidential candidates are unlikely to treat one another with dignity. There will be name-calling. Mudslinging. And ugly, unkind epithets hurled at one another. Unfortunately, too many of their supporters take their cues from the candidates themselves.

Christians, however, are always called to be different from the world. To be changed and transformed in our attitudes and actions. In our language. And in our treatment one another.

Following the Golden Rule is fundamental to Jesus’ teaching. “In everything, therefore, treat people the same way you want them to treat you” (Matt 7:12). All relationships are improved when we follow this divine directive.

Implied in this statement is a basic human dignity that we all possess and ought to acknowledge in our treatment of one another. Dignity, of course, as A. W. Tozer suggested begins with God. “Back of all, above all, before all is God; first in sequential order, above in rank and station, exalted in dignity and honor.”

Because we are created by God in His image and after His likeness (Gen. 1:26), we should show respect and dignity to one another. Humankind is unique in creation. The Psalmist said we’re created just “a little lower than the angels.” We’ve been “crowned with glory and honor.” And given “dominion” over the animal kingdom and all of God’s creation (Ps 8:4-8).

What if we approached the next year with this focus to treat each other with greater dignity? Not just in politics, but in all relational interactions.

Former White House Press Secretary and political commentator Dana Perino once said,”I get a choice every time I have to open my mouth: that it can be with civility and dignity and grace – or not.”

Our homes, churches, workplaces would be better because our differences would be tempered with kindness, courtesy, and mutual respect. Remembering that we all, regardless of the diversity of our views and values, are created by God and bear the stamp of His image, would elevate our behavior.

Not every remark requires a retort. Not every facebook post calls for a response. Not every difference demands debate. One of my favorite authors, anonymous, reminds us: “Knowing when to walk away is wisdom. Being able to, is courage. Walking away with your head high is dignity.”

Teddy Roosevelt was right, “Politeness is a sign of dignity, not subservience.”

10 responses to “Word of the Week: Dignity”