An Ironic Absence of the Bible 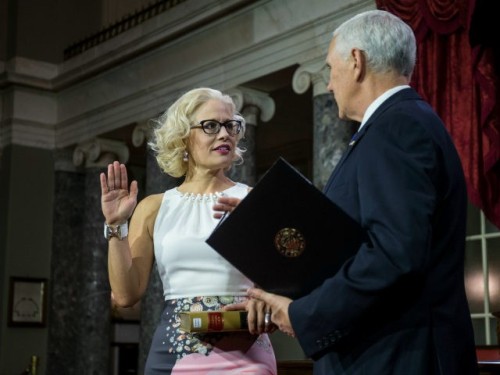 Last week newly elected Arizona Senator Kyrsten Sinema took the oath of office but refused to be sworn in on the Bible. Instead, she placed her right hand on a book of laws that included the Arizona and United States Constitution.

“Kyrsten always gets sworn in on a Constitution simply because of her love for the Constitution,” the senator’s office said.

However, there may be a couple of other reasons. First of all, she is the first openly bisexual U.S. Senator; Secondly, according to the Pew Research Center for Religion and Public Life, the Arizonan is the “only member of the Senate who does not identify as a member of a religion.”

Ironically Sinema’s first name has a Greek origin and is derived from Latin which means “follower of Christ.”

In an article about Senator Sinema on the Christian Post, Op-Ed contributor Jerry Newcombe raises these questions: “Why do we have this system of swearing-in public officials in the first place? And swearing-in on the Bible? And saying, “So help me, God.” — which, by the way she did (indirectly, at least)? Who cares about such “antiquated” customs? Do these symbols matter?”

Traditionally and historically in our country taking oaths is the way we seal a commitment. But we do it with God as our witness. Just like when taking our marriage vows before God and pledge our faithfulness to one another.

Our first President, George Washington observed in his 1796 farewell address that when we weaken religion, we erode the basis of our oaths.

“Let it simply be asked: Where is the security for property, for reputation, for life, if the sense of religious obligation desert the oaths which are the instruments of investigation in courts of justice?” If there is no God to Whom we shall give an account, we can do whatever we want.”

“One of the key points about America’s heritage that is often overlooked,” observed Newcombe, “is that the Biblical concept of covenant gave rise ultimately to our two key founding documents, the Declaration of Independence and the Constitution.”

“They are written agreements, under God, signed by the participants. More importantly, our founding documents are the culmination of about a hundred or so compacts and frames of government created by the Puritans and other Christians, using a Biblical covenant as the model.”

Dr. Donald S. Lutz of the University of Houston, who has been studying constitutions for decades, once said in an interview, “Without a belief in the Bible, we would not have the Declaration of Independence or the U.S. Constitution as we have it.”

In Lutz’s book, The Origins of American Constitutionalism, he writes: “The American constitutional tradition derives in much of its form and content from the Judeo-Christian tradition as interpreted by the radical Protestant sects to which belonged so many of the original European settlers in British North America.”

Past Presidents and political leaders have often openly acknowledged the importance of the Bible.

Our second President, John Adams, advanced this thought: “Suppose a nation in some distant Region should take the Bible for their only law Book, and every member should regulate his conduct by the precepts there exhibited! Every member would be obliged in conscience, to temperance, frugality, and industry; to justice, kindness, and charity towards his fellow-men; and to piety, love, and reverence toward Almighty God … What a utopia, what a Paradise would this region be.”

The 28th President of the United States, Woodrow Wilson said, “The Bible is the one supreme source of revelation of the meaning of life, the nature of God, and spiritual nature and needs of men. It is the only guide of life which really leads the spirit in the way of peace and salvation.”

“The strength of our country is the strength of its religious convictions,” affirmed our 30th President Calvin Coolidge. “The foundations of our society and our government rest so much on the teachings of the Bible that it would be difficult to support them if faith in these teachings would cease to be practically universal in our country.”

Refusing to be sworn into office by placing your hand on the Bible, does not change the fact that God still rules. He ordains governments. They rise or fall according to His will. And we are subject to Him and His Word.

4 responses to “An Ironic Absence of the Bible”