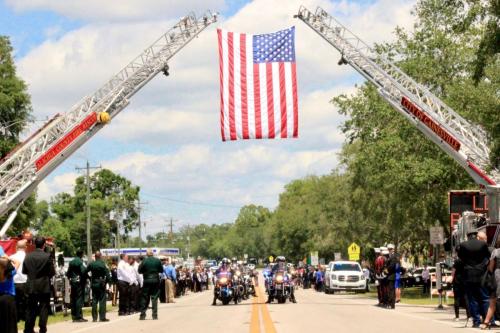 Yesterday was the funeral service for the two slain Gilchrist County Sheriff’s deputies-Noel Ramirez and Taylor Lindsey. It was held in the Bell Middle/High School auditorium. The two were ambushed while eating lunch at a local restaurant in Trenton, Florida last Thursday.

Governor Rick Scott attended and spoke at the funeral expressing his condolences. Law enforcement representatives came from all 67 counties in Florida. There were also representatives from across the country including officers from the Dallas-Fort Worth area. Some Canadian officers even attended to pay their respects.

Rod Hastings, the brother we’re staying with this week, was at the procession and said law enforcement vehicles stretched 15 miles from Trenton to Bell and on to Bronson.

One of the ladies at the Midway Church was in charge of providing food for the officers at the Gilchrist County Sheriffs’ office with the assistance of other sisters in the congregation.

I learned that an anonymous donor from New York paid off the home mortgage for officer Ramirez’s wife. Another bought the girlfriend of officer Lindsey a car.

Each night at the Midway church fervent prayers have been offered for the families of the slain deputies, the community and for our law enforcement officials.

People here are hurting. And good people are helping.

This reminds me of a statement from Peter’s sermon to the Gentile Roman soldier Cornelius in Acts 10:38.

“You know of Jesus of Nazareth, how God anointed Him with the Holy Spirit and with power, and how He went about doing good and healing all who were oppressed by the devil, for God was with Him.”

What a wonderful epitaph for someone’s life–“He went about doing good.”

While Jesus came on a spiritual mission to “seek and save the lost” (Lk.19:10), his life and ministry was punctuated by numerous occasions of helping others, of which Peter was a first-hand witness.

And the storm that threatened the safety of the disciples was calmed (Mk 4:35-41).

When his friend Lazarus died, Jesus went to see his sisters, Mary and Martha. He stood at the tomb and wept. And then raised Lazarus from the dead (Jn 11:20-44).

While we can’t still the storm, heal the sick or raise the dead, we can “go about doing good.” Helping the helpless. Supplying necessities for the needy. Providing shelter for the homeless. Offering food to the hungry. Giving water to the thirsty. Or giving clothes to the destitute.

Furthermore, we don’t have to wait for disaster to strike to “go about doing good.” We can make a difference in the lives of others with various acts of kindness. I’ve known many brethren through the years who were quick to press a $100 bill into the hand of someone who needed help. Or pay their utility bill. I can think of college students who’ve been assisted by a generous benefactor paying their college tuition.

“Doing good” may be shoveling snow off a neighbor’s driveway. Or sitting with an anxious sister during her husband’s surgery. Or babysitting a young couple’s kids so they can enjoy a rare date night together.

I know of a brother who literally took the coat off of his wife’s back and gave it to a homeless woman shivering in the cold. And for the record, his wife agreed. He was known for his many generous acts of kindness through the years. Like Jesus, he went about doing good.

I’m reminded of a quote by Napoleon Hill who observed that “Every adversity, every failure, every heartache carries with it the seed of an equal or greater benefit.”

Out of this tragedy in Gilchrist County good can come. Not only in the lives of those who are now mourning, but through the generosity of others who follow the example of Jesus and go about “doing good.”