Word of the Week: Hypocrite 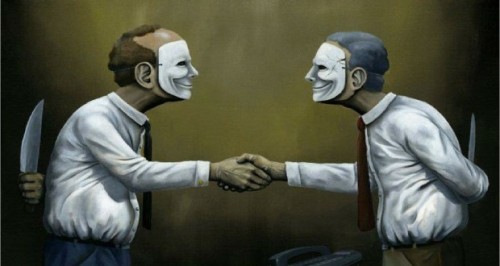 “So many self-righteous hypocrites” tweeted Donald Trump..This was in response to the Republican backlash from the recently released video with his crude, coarse and disgusting descriptions of women.

Conversely the headline of Saturday Boston Herald screamed: Clinton Playing Prude the Height of Hypocrisy. The article by Adriana Cohen  well documented Hillary Clinton’s language and attitude toward the women abused by her husband with her “feigned outrage over Trump’s private comments.” Cohen calls it “unspeakable hypocrisy in light of her husband’s wandering ways.”

Of course, Trump has also been labeled as a hypocrite. An LA Times article asserted that his entire “campaign could be summed up in one word: hypocrisy.” They opine that he is only interested in enhancing the “Trump brand” and “has no more interest in everyday Americans than the-man-in the home.”

So, with word “hypocrite” being bandied about so freely by both politicians and the news media, we thought it might be nice to see what the Bible says and how it uses the word.

“Hypocrite” in its various forms is found 40 times in the Bible. In Greek culture it referred to an actor who assumed the role of another character. The word is used Biblically to refer to one who an impious person pretending to be pious. A hypocrite is one who conceals his true thoughts, feelings, or character by acting and speaking differently and deceptively.

In Matthew 6:1-16, Jesus warns against engaging in righteous acts just to receive the applause and accolades of others. One may do good, but do it for the wrong reason. He gives three examples.

(1) Don’t be a hypocrite in your giving by making a big show just to be seen by others and to receive their praise.

(2) Don’t be a hypocrite in your prayers by offering long, repetitious and formalized prayers for public praise.

(3) Don’t engage in fasting so others will be impressed with your piety.

In Matthew 23, Jesus delivered a scathing denunciation against the Pharisees, calling them hypocrites 8 times. In each case, Jesus cited examples of them requiring of others a standard they failed to embrace themselves.

Jesus nailed the heart of the issue with this metaphor . “Woe to you, scribes and Pharisees, hypocrites! For you cleanse the outside of the cup and dish, but inside they are full of extortion and self-indulgence. Blind Pharisee, first cleanse the inside of the cup and dish, that the outside of them may be clean also. (Matt 23:25-26).    Clearly hypocrisy is repugnant to the Lord. True Christians must rise above the temptation of pretense and feigned righteousness.

Understand, however,  that Jesus is not condemning imperfections in our lives. Warren Wiersbe expressed it well when he wrote “Hypocrisy means deliberately pretending. None of us lives up to his ideals; none of us is all that he would like to be or all that he could be in Christ. But that is not hypocrisy. Falling short of our ideals is not hypocrisy. Pretending we have reached our ideals when we have not – that is hypocrisy.”

Sadly, we almost expect our politicians to speak one way, but act another. To change positions to placate and appease whatever group they are trying influence. In this current election we have all witnessed enough hypocrisy to go around for all of the candidates.

The post is really not about the hypocrisy in politics. But an effort to remind Christians to recognize hypocrisy wherever and with whom ever it may rear its ugly head. To understand the seriousness of hypocrisy in the eyes of the Lord. And be sure that our motives are pure, honest, honorable and beyond the taint of hypocrisy.

The danger of hypocrisy is succinctly expressed in a quote by George Orwell: “He wears a mask, and his face grows to fit it.” And its impact on others is bluntly stated by C.H. Spurgeon, “Of all the things that stink in the nostrils of men, hypocrisy is the worst.”

Jesus’ warning is sobering: “Woe unto you, hypocrites!”

2 responses to “Word of the Week: Hypocrite”