IT’S FRIDAY. BUT SUNDAY’S COMING! Faces Around the Cross: The Centurion Soldier 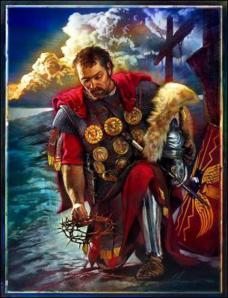 It was Friday.  And the Jews were preparing for the Passover feast.  Behind the scenes their rulers had captured Jesus.  Tried him at night and pressured Pilate to sign the death sentence.

For the Roman soldiers it was another day at work.  Standing guard.  Keeping peace.  Carrying out orders.  And executing criminals.

The Roman army was composed of 25 legions of soldiers with 6,000 men in each legion.  These were broken down into cohorts, maniples and centuries.   This Bible says he was a centurion, a commander of a 100 man division.

For this Roman soldier his assignment on this Friday began like any other.  But ended like no other.  Either in his life.  Or in history.  He had the responsibility of guarding Jesus.  Most likely he was given charge of overseeing and executing the crucifixion. END_OF_DOCUMENT_TOKEN_TO_BE_REPLACED

Filed under Cross, It's Friday. But Sunday's Coming!

Tagged as Cross, Crucifixion, It's Friday. But Sunday's Coming