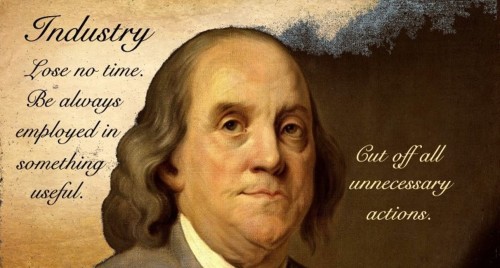 “What are my highest priorities in life?” asked the American statesman, philosopher, and inventor Benjamin Franklin when he was only 22 years old.

From his introspection, he developed 12 virtues that would serve as his governing values which he conceived as a “bold and arduous project of arriving at moral perfection.”

When He shared them with a Quaker friend, seeking his opinion, he suggested that Franklin overlooked one important virtue  which became #13, with a simple four word description.

1. TEMPERANCE. Eat not to dullness; drink not to elevation.

2. SILENCE. Speak not but what may benefit others or yourself; avoid trifling conversation.

3. ORDER. Let all your things have their places; let each part of your business have its time.

4. RESOLUTION. Resolve to perform what you ought; perform without fail what you resolve.

5. FRUGALITY. Make no expense but to do good to others or yourself; i.e., waste nothing.

6. INDUSTRY. Lose no time; be always employed in something useful; cut off all unnecessary actions.

7. SINCERITY. Use no hurtful deceit; think innocently and justly, and, if you speak, speak accordingly.

8. JUSTICE. Wrong none by doing injuries, or omitting the benefits that are your duty.

9. MODERATION. Avoid extremes; forbear resenting injuries so much as you think they deserve.

10. CLEANLINESS. Tolerate no uncleanliness in body, clothes, or habitation.

11. TRANQUILLITY. Be not disturbed at trifles, or at accidents common or unavoidable.

12. CHASTITY. Rarely use venery but for health or offspring, never to dullness, weakness, or the injury of your own or another’s peace or reputation.

At age 78 Franklin admitted that he never achieved perfection in these 13 areas, but admitted that he became “a better and happier man than I otherwise should have been, if I had not attempted it.”

Something to think about.