“Who Can Be Against Us?” 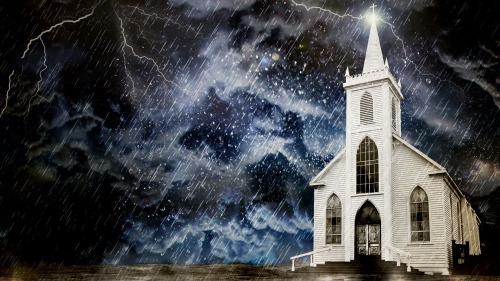 A Canadian preacher, Stephen Sheane, tells a story from two centuries ago about a military officer and his wife who were aboard a ship caught in a raging ocean storm.

Seeing the frantic look in her eyes, the man tried unsuccessfully to allay her fears. Suddenly she grasped his sleeve and cried, “How can you be so calm?”

He stepped back a few feet and drew his sword. Pointing it at her heart, he asked, “Are you afraid of this?”

Without hesitation, she answered, “Of course not!”

“Because it’s in your hand, and you love me too much to hurt me.”

To this, he replied, “I know the One who holds the winds and the waters in the hollow of His hand, and He will surely care for us!”

Often like the anxious woman, we find ourselves amidst the raging storms of life and feel fear. Dread. Worry. And uncertainty.

In today’s Bible reading, Paul raises this serious and significant question: “If God is for us, who can be against us?” (Rom. 8:31).

Sometimes, like the Patriarchal Jacob, who thought his beloved son Joseph was dead and now he was about to lose two more sons, we languish and lament, “Everything is against me.”

“Who can be against us?”

When we watch the evening news, or just observe the world in which we live, we see a lot that’s against us.

Foreign foes are against our country.

Misguided religious fanatics are against Christians.

Atheists and infidels are against us and God.

False religion is against the Biblical principles we espouse.

Liberal theology is against the conservative principles we hold dear.

Humanistic, radical, nefarious leftist groups are against the family values we preach and practice.

And if that’s not enough, at times it seems as if our elected officials and our own government are against, Christ, Christians, and the Bible.

Paul’s question, however, is neither raising doubt nor enlisting a list of our enemies and adversaries. It’s rhetorical. C. D. Hamilton was correct in his exegesis when he wrote, “If God is so demonstrably for us, who can be against us? Who can really be an effective adversary? (Paul) is pointing out, however, that whoever and whatever they may be, there is none who can overcome him who is for them…”

These following rhetorical questions also remind us of God’s continual care and concern for His people.

Will he not graciously give us all things?

Who shall bring any charge against God’s elect?

Who shall separate us from the love of Christ

God will respond to all our needs. Relieve our fears. Rescue us from our adversaries. Recompense our enemies. Redeem us from Satan’s clutches. And reward us eternally.

Oh, by the way, remember Jacob who thought everything was against him?
Although his heartache was real, Jacob was mistaken and his grief and fears were in founded in deception. Joseph was alive and well. He would live to see him and his sons, Simeon and Benjamin, again.

God in his providential care would assuage his sorrow, requite his faithfulness, reunite his family and supply all of their needs in the land of Goshen.

Do not fret, fear or allow your faith to falter, regardless of the waywardness of our culture, or the opposition of ungodly forces. or even the demise of our beloved country.

One response to ““Who Can Be Against Us?””