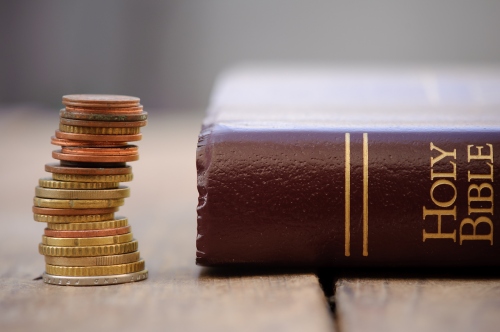 Years ago Paul Harvey told a story on his radio show about The Butterball Turkey company setting up a hotline to answer consumer questions about preparing holiday turkeys.

One woman called to inquire about cooking a turkey that had been in her freezer for 23 years.

The operator told her it might be safe if the freezer had been kept below 0 degrees the entire time. But the operator warned the woman that, even if it were safe, the flavor had probably deteriorated, and she wouldn’t recommend eating it.

The caller replied, “That’s what we thought. We’ll just give it to the church.”

Sadly that is the attitude of too many folks when it comes to giving. Especially when it involves the Lord’s work.

Yesterday in my Bible reading I was reminded of the heart of the giver by Jesus’ recognition of a woman most would consider insignificant. But she did something very significant.

During the last week of Jesus’ life he and the disciples were in Jerusalem sitting opposite the temple treasury. People were making their contributions. The receptacles were shaped like a trumpet and made from some type of metal. All money was in the form of coins. There would have been no paper money or folded checks. Just coins.

Rich folks were contributing large sums so the coins would have made a lot of noise. But the Bible says, “Then one poor widow came and threw in two mites, which make a quadrans.”

So He called His disciples to Himself and said to them, “Assuredly, I say to you that this poor widow has put in more than all those who have given to the treasury; for they all put in out of their abundance, but she out of her poverty put in all that she had, her whole livelihood.”

The mite was a coin called a “lepton,” the smallest of coins. It literally means “a thin one.” It was worth one-fortieth of one pence. So, tossing in two mites literally would not have made much noise. No one would notice. Or be impressed.

But Jesus saw what the poor widow did. While he doesn’t say she is the model for giving and that we should liquidate all of our assets, he does commend her. And sets her as an example above those who were wealthy and gave substantial amounts.

There are several lessons we can learn from this real-life incident.

(1) God is more concerned with the heart of the giver than the amount.

We recognize those who give large sums of money to charitable causes. Their names are put on plaques. Buildings are named after them. They are honored for their gift. But some may actually sacrifice more who give less.

The word “abundance” in the text means “an overflow; excess; more than enough.” It can even refer to that which is “left over.”

It is possible to give a lot either to the church or other causes, but actually live a life of excess, and only be giving God your leftovers. As James Russell Lowell once said, “The gift without the giver is bare.” God wants you. Even more than large amounts of money you might give.

The text says “Jesus watched.” He knew the heart of each giver. The amount. And their motive for giving. Some gave out of their abundance, but she gave out of her poverty.

It’s good to remember the Lord knows how much we possess. How we use our resources. And the motivation behind our giving. Like some of the Pharisees, are we giving “to be seen of men”? Are we giving for our own glory? Are we giving with an ulterior motive? Are we giving grudgingly?

(3) Giving is about our relationship with God.

The poor widow was a woman of faith. She trusted God to provide for her future needs. And she quietly did what she thought was right without fanfare or recognition.

It is well to note that she gave to a system that abused her. The Pharisees “devoured widow’s houses.” They “made merchandise” of God’s house. Yet none of that concerned her. She wasn’t giving to them, but to God.

Regardless of the amount, all that we have belongs to God. He is the Owner. We are the managers. So, we are called to faithful stewardship of our possessions.

As we reflect on our personal stewardship, it is well to consider these two challenging thoughts.