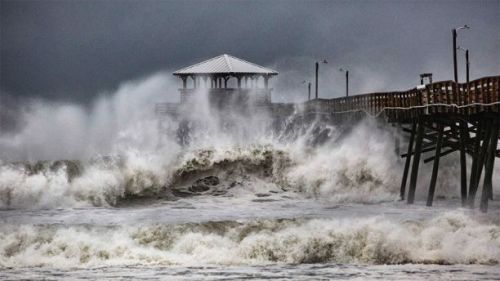 This morning as I awake enjoying my coffee in the comfort and safety of a friend’s home in Missouri, many are facing what is being described as a “monster storm” in hurricane Florence.

Winds are battering the coastal cities of North Carolina and torrential rains are expected to cause “catastrophic flash flooding and prolonged significant river flooding” according to authorities and news reports.

Even though Florence has been downgraded to a category 1 hurricane, officials are bracing for the worse as winds extend 80 miles from the center and tropical force winds to 195 miles.

I can’t help but think how storms are a metaphor for life. Life is fragile. Man is frail. Our mighty efforts are feeble compared to the power of the storm. Compared to the Master who controls it. It reminds me of another storm. A long time long ago. On the sea of Galilee. Luke records it.

Now it happened, on a certain day, that He got into a boat with His disciples. And He said to them, “Let us cross over to the other side of the lake.” And they launched out. But as they sailed He fell asleep. And a windstorm came down on the lake, and they were filling with water, and were in jeopardy. And they came to Him and awoke Him, saying, “Master, Master, we are perishing!” Then He arose and rebuked the wind and the raging of the water. And they ceased, and there was a calm. But He said to them, “Where is your faith?” And they were afraid, and marveled, saying to one another, “Who can this be? For He commands even the winds and water, and they obey Him!” (Luke 8:22-25).

The storms of life test the strength of my faith. The depth of my dedication. The seriousness of my commitment. The measure of my maturity. The essence of my attitude. And the content of my character.

This is true of actual storms. It is true of the problems, challenges, and troubles we face in life. And we will face them. We all do. All kinds of storms. Financial storms. Relationship storms. Physical storms. Spiritual storms. Storms of sickness, sorrow and death. Storms when sin invades our hearts, and homes. These storms are not pleasant. They inflict pain. Cause heartache. And leave emotional damage in their wake.

So, what are we to do when the storms of life beat upon us? Do what the disciples did. Go to the Master. Seek his help. Plead for his mercy.

There may be times when we are afraid like the apostles were. We may feel frantic. Our faith may even falter a bit. But one thing I know for sure is this. Jesus provides calm in the midst of the storm. He who quieted the winds and waves can calm the restless spirit. He can heal the aching heart. He can soothe the troubled soul.

The apostle Peter was on that little boat. He felt the spray of the sea in his face. He braced himself against the fierce winds. He experienced the feeling of fear. Anxiety. Worry. But he heard the Master’s assuring voice. He saw the Lord’s decisive action. And he knew the Savior’s concern. For them. Their welfare. And their faith. So, he would write many years later, “Cast all your care upon Him, for He cares for you.”

Our prayers are with those displaced by Florence and others facing her wrath today. As people recover from the hurricane, may they find help and hope both from the Lord and His people. And as we all face the various storms of life that suddenly swoop down and interrupt our routines, let us remain faithful. Resolute. And prayerful.

The Lord is not asleep. He sees. He hears. He knows. And He cares.

4 responses to “Weathering the Storm”