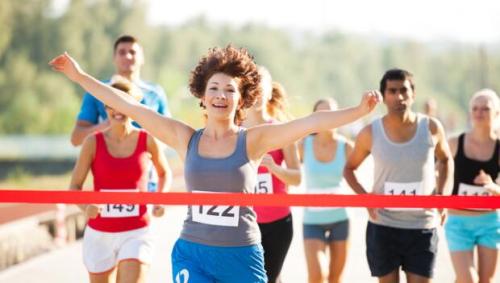 How many sporting events have you seen a team get off to a rocky start, find themselves trailing at halftime, but rallied to win the game? Or a runner back in the pack, but finishes strong to win the race. It happens. A lot.

Author Jim George was right when he wrote, “It’s not how you start that’s important, but how you finish.”

Recently I was reading Mark’s Gospel as part of our congregational Bible reading program. It’s estimated that over 90% of Mark’s narrative can be found in other accounts. However, there are two curious verses that only he records. Mark 14:51-52.

“Now a certain young man followed Him, having a linen cloth thrown around his naked body. And the young men laid hold of him, and he left the linen cloth and fled from them naked.”

Most commentators believe that “young man” was Mark. His mother, Mary, owned a large house in Jerusalem and was a disciple of Christ (Acts 12:12). It is suggested that Mark was awakened by the commotion of Jesus’ arrest. In his haste he grabbed a bed sheet to wrap around and him and followed in the shadows, listening and watching.

As a result, when Jesus was arrested, Mark was seized and almost arrested himself. But like the rest of the disciples, he deserted Jesus and fled into the darkness of the night.

Our next exposure to Mark is in Acts 13 when he accompanied Paul and Barnabas on their first missionary journey. But when the going got tough Mark deserted them and returned to Jerusalem. When they were ready for a second journey Barnabas wanted to take Mark, but Paul strongly objected. In fact, the Bible says there was a “sharp disagreement” between them and they parted ways.

It’s not a very good resume’ for young John Mark. First, he fled from Jesus. Then he folded on Paul. A rocky start to discipleship. A tough beginning. Not a great situation when you can’t use the apostle Paul as a reference. However, Mark didn’t quit. He didn’t allow a couple of setbacks to define who he was. His failures were not final.

Barnabas, ever the son of encouragement, saw something special in Mark. And took him to Cyprus on a missionary trip. Peter later speaks of him as a son in the faith. But as the years passed, Paul changed his mind about Mark. When he faced the possibility of execution by the Roman government and people were deserting Paul because of the intense pressure, who could the apostle rely on?

Paul instructs Timothy to bring Mark with him saying, “because he is helpful to me in my ministry’ (2 Tim. 4:11). Two other times Paul mentions Mark in a positive light (Col. 4:10; Phile, 24), referring to Mark as a “fellow laborer.”

Maybe Mark records those two verses to say, “I was there, too. I ran. But not anymore.” Could it be his subtle way of reminding us that we can overcome a bad beginning? There are many lessons to learn from John Mark.

(1) Sometimes in our youth, we can make foolish mistakes, but they don’t have to hinder future success or faithfulness to the Lord.

(2) It is possible to begin a ministry and for whatever reason fail to see it through. Yet, that does not negate the possibility for subsequent opportunities.

(3) Like Mark, we can learn from our mistakes, failures, and shortcomings. We can overcome humiliation, embarrassment, and defeat. And become a significant contributor to the Cause.

(4) We need men today like Barnabas who will encourage young men, even if some in positions of prominence question their worth because of their setbacks.

(5) Finally, it is worth noting that Paul changed his mind about Mark. As Mark forged on to overcome failure, his faithfulness and fortitude convinced Paul that Mark was profitable for his ministry and accorded him the honor of being a “fellow laborer.” Keep an open mind about others. Don’t allow yourself to be prejudiced against others for their youthful indiscretions.

You can overcome a bad beginning. Keep moving forward. It’s not where you began. But how you end.

6 responses to “Overcoming a Bad Beginning”