A Legacy of Sin and Shame 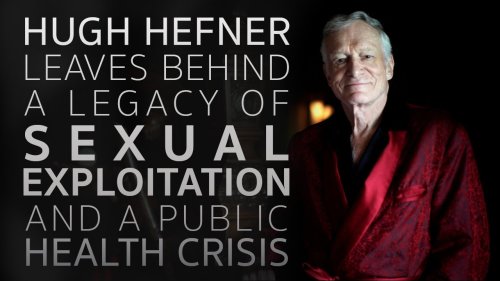 Tributes are rolling in for his recent passing.

“He was an American icon.”

“Thank you for making the world a better place.”

“You were a gentleman, charming, elegant, chivalrous and so much fun.”

“You taught me everything important about freedom and respect.”

These accolades are from various Hollywood and pop stars regarding the passing of Playboy founder Hugh Hefner on Tuesday night at age 91.

“My father lived an exceptional and impactful life as a media and cultural pioneer and a leading voice behind some of the most significant social and cultural movements of our time in advocating free speech, civil rights, and sexual freedom,” Hefner’s son Cooper said in a statement.

Two of the most ironic comments ended with “Godspeed” and “RIP.”

Hefner did not believe in God. And once said in an interview that he was not afraid of death and had no faith in an afterlife.

The major civilizing force in the world is not religion,” Hefner wrote in his Playboy manifesto, “it is sex.”

On another occasion, Hefner said, “I’d like to be remembered as someone who played some part in changing our hurtful and hypocritical views on sex–and had a lot of fun doing it.”

These quotes by Hugh Hefner and others illustrate how secular, sensual and sinful our society has become. And they demonstrate how the devil seeks to make sin attractive and winsome. Of course, this is nothing new. History does repeat itself. Old Testament Israel had left God and turned to idolatry and sexual immorality. The prophet Isaiah’s commendation of them, is fitting today.

While the world wants to portray the freewheeling Playboy as erudite, suave, and sophisticated, the Bible provides a true picture in the eyes of God. Those who have sunk into the depths of sexual immorality can be described as “futile in their thoughts” whose “foolish hearts (are) darkened.” Yes, “professing to be wise, they (have become) fools.” And “in the lusts of their hearts, (they have dishonored) their bodies among themselves.” (Rom. 1:20-21-24)

Cal Thomas was right when he wrote that Hefner’s legacy was ruined lives…Whatever fantasies he fulfilled in some men, he led them into a lifestyle that was bad for women and children and eventually themselves. The testimonies of women associated with Hefner about how they felt used and often discarded like spoiled meat are sad.”

“Hugh Hefner leaves behind a legacy of sexual exploitation and public health harms,” said Patrick Trueman, President of the National Center on Sexual Exploitation. “Playboy popularized the commodification of the female body in soft-core pornographic magazines in the 1960s, and it laid the groundwork for the public health crisis of Internet pornography that America is experiencing today. Reams of research show that Internet pornography is linked to neurological harms, sexual dysfunctions and increases in rates of sexual violence.”

“It’s time to acknowledge the reality that Playboy is actually just another brand for old-fashioned misogyny,” Trueman said.

Hefner’s impact on our culture reminds me of the legacy of the Old Testament King of Israel, Jeroboam. His induction of idol worship led Israel away from God and “made Israel to sin.” The epitaph of every King following Jeroboam was “He walked in the wicked ways of Jeroboam who made Israel to sin.”

Hedonists like Hefner are idolized and celebrated in our self-indulgent culture that seeks fleshly gratification with impunity. More than ever Christians are called to “be not conformed, but transformed.” (Rom. 12:1-2). And to seek purity of mind, heart, and life.

The temptation to fleshly gratification is more easily accessed today than when Hefner began Playboy magazine. We must not be ignorant of “Satan’s devices” (2Cor. 2:11). We must be alert. Watchful. And vigilant.

The command to “flee sexual immorality” (1Cor. 6:18) and “abstain from fleshly lusts which war against the soul” (1 Pet. 2:11) sound old fashioned but are just as relevant today as when they were written in the first century.

The life and legacy of Hugh Hefner is forever shamefully woven into the fabric of our society. There is nothing we can do to change it.

The good news is that each of us is daily writing our own legacy that we can leave–an influence of goodness and godliness in our own circles of influence. May we each rise above the putridity of our carnal culture and “seek those things which are above” (Col. 3;1-2).

10 responses to “A Legacy of Sin and Shame”