Was Franklin Graham Too Harsh? 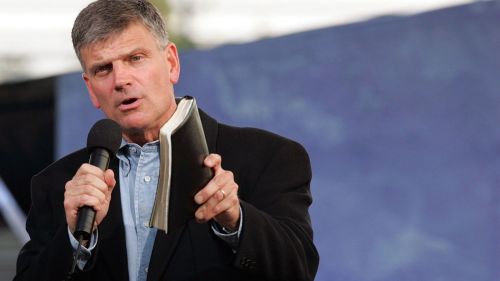 In response to the Islamist terrorist attack in Manchester, England, which killed 22 people and wounded 120, evangelical leader Franklin Graham posted a sharply worded warning on his facebook page.

“EVIL LOSERS. President Donald J. Trump was so right when he called the Manchester Islamic terrorists ‘losers.’ The truth is, they’re losers in this world and in the next.”

“The president said, ‘This wicked ideology must be obliterated.’ Jihadists following this are taught the lie that if you kill an infidel (a Christian or a Jew) and die in doing so, you will go to paradise where 70 virgins await you,” said Graham.

He continued, “I’ve got news for them—Hell awaits, with real flames and real fire. Hell is a real place—and so is Heaven, but there is only one road to Heaven.”

It a separate post he called this attack a “despicable and cowardly act.”

This is not the first time Franklin Graham has been highly critical of the Islamic religion. Almost all of the liberal, left news media have reacted negatively to Graham’s comments through the years. In fact, many conservatives believe that Franklin Graham is too harsh. They think he should make Christianity more appealing by not condemning Muslims.

While I would disagree with Franklin Graham on several theological issues, is it fair to ask, “Was he too harsh?”

One might argue that he should leave the judging up to God and not offer his opinion. Or some might say that his speech should be more gracious and “seasoned with salt” (Col.4:6) in responding to the Islamic attacks. Others would say that no one is converted by sharp rhetoric.

However, let’s consider some facts.

(2) Murderers will go to Hell. The Bible says, “But as for the cowardly, the faithless, the detestable, as for murderers, the sexually immoral, sorcerers, idolaters, and all liars, their portion will be in the lake that burns with fire and sulfur, which is the second death” (Rev. 21:8).

I would not want to meet the Lord in judgment with the blood of 22 women and children on my hands.

(3) Jesus, not Mohammad, is the way to God. Graham was right. Jesus is “the way, the truth and the life.” (Jn 14:6). He is the only way to have access to the Father. In fact, Muslims do not believe Jesus was the Son of God, which directly contradicts the plain teaching of the Bible. Romans 1:2 says, Jesus was “ declared to be the Son of God with power according to the Spirit of holiness, by the resurrection from the dead.”

In fact, the Quran states that Jesus was not crucified and did not die for our sins. The death, burial and resurrection of Jesus is the crux of Christianity (1 Cor 15:1-4). To deny is it, to reject the gospel message.

(4) Seventy virgins DO NOT await Muslims in the after life for maiming and murdering Jews and Christians.”Here’s what the Bible says await those who reject God and the Gospel of Jesus Christ.

Was Franklin Graham too harsh?

I’ll leave it with the reader to decide.

“For we know Him who said, “Vengeance is Mine, I will repay,” says the Lord. And again, “The Lord will judge His people.” It is a fearful thing to fall into the hands of the living God.”

4 responses to “Was Franklin Graham Too Harsh?”