“They Booed The Name of Jesus” 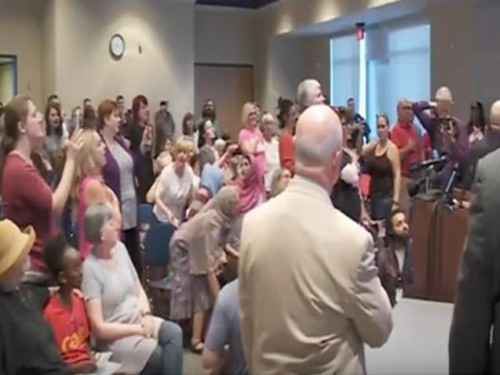 Homosexual acceptance. Same-sex marriage. Transgender bathrooms. Just when you think you’ve heard it all. Then you hear something that leaves you shaking your head in disbelief. And almost speechless.

Almost. Because ThePreachersWord has about a 500 word retort.

At a recent town hall meeting Louisiana Senator Bill Cassidy was greeted by a rowdy crowd at the East Jefferson Parish Library. The Senator was late because he was surveying tornado damage in a nearby area. And the venue was too small to hold the overflow turnout.

When Cassidy arrived he introduced Louisiana State Chaplain Michael Sprague to lead the opening prayer. The testy crowd exploded. “Prayer! Prayer!” shrieked one woman. Others are heard yelling, “Separation of church and state!” Some protestors hollered, “Pray on your own time!”

The video shows the protests briefly subsided until Sprague ended the prayer saying, “We pray in Jesus name.” This incensed the attendees who roared again and began jeering, booing and shouting, “separation of church and state.”

After the meeting when the Senator greeted Sprague he’s overheard exclaiming, “Wow! They booed the name of Jesus.”

Please be advised that ThePreachersWord is not opposed to a separation of church and state. We don’t want state sponsored religion. And we value the freedom to worship as the Bible dictates. This is about respect. Values. And ironically, tolerance.

Yes, it is ironic that the radical far-left in our country accuses Christians of being intolerant. Yet, they are dogmatic in their disdain for Christianity. Unwilling to tolerate our Biblical values. And bigoted, biased and down right hateful toward all things connected to Jesus Christ.

In the beginning of the gospel, the apostles were commanded by the rulers not to preach in the name of Jesus (Ax 4:13-22). The spread of Christianity throughout the Roman Empire caused conflict. Preachers were killed. Others were beaten, imprisoned or stoned. This response continues to be the case in some countries today.

In the past we have enjoyed peaceful acceptance of Christianity in our country, since America was founded upon Judeo-Christian values. Our currency is inscribed with the words “In God We Trust.” When we recite the pledge of allegiance to the flag, we say, “ One nation under God.” The United States Congress opens each session with prayer. Most state legislatures open their sessions with a prayer.

For those who cry “separation of church and state,” I would remind you that in 2014 the United States Supreme Court, in a 5-4 ruling, upheld opening prayers at government meetings. In fact, the history of legislative prayer dates back to our founding fathers and framers of the Constitution.

Sadly, this makes no difference to an increasingly secular society. One that is disrespectful to Jesus and His teachings. And is hypocritically intolerant of the Christian faith.

In a postmodern culture, Christians must be “strong and of good courage.” Let us stand against the “wiles of the devil.” Uphold the banner of Truth. Live righteously and respectfully. And prayerful petition the Father to bless us. Strengthen us. And provide an atmosphere where we can live peacefully.

3 responses to ““They Booed The Name of Jesus””