Excellent Advice From A Police Chief 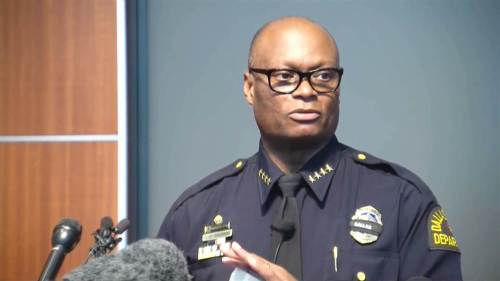 “What advice would you give young black men to overcome their fear?”

This question was posed by a reporter to Dallas Police Chief, David Brown, in a news conference Monday.

I love his answer.

“Become a part of the solution,” Brown replied.”We’re hiring.”

“Get off that protest line and put an application in. And we’ll put you in your neighborhood, and we’ll help you resolve some of the problems you’re protesting about,” he added.

Brown’s advice comes only 4 days after watching 5 of his officers gunned down by a guy with grudge against cops. Especially white cops.

Brown, a black man, knows what it means to be a part of the solution. He joined the department in 1983 after watching his friends consumed by crack cocaine.

“It broke my heart,” said Dallas’ top cop. “And it changed what I wanted to do.” As a result, following high school Brown turned down a full ride scholarship to the University of Texas to pursue his dream of being a police officer.

His career has included working on patrol, SWAT divisions and internal affairs. Afer serving as assistant chief of police, Brown was promoted to police chief in 2010. He shared his gratitude for the opportunity to improve the inner city neighborhood where he grew up.

David Brown’s advice is sound, solid, and scriptural. God created us to be responsible, accountable, and answerable for our own actions and attitudes. Likewise the Bible condemns laziness, lethargy and irresponsibility.

In fact, Brown’s counsel to the protestors has a great application in all areas of our lives–our homes, our churches, our jobs, and our relationships. It’s easy to complain, criticize and clamor against the inequities, problems and failures of others without providing any workable, reasonable solutions.

Too often in our homes we find finger pointing instead of a willingness for husbands, wives to respect each other’s God-given role, responsibilities and work together to make their marriage work and mutually fulfilling. It’s learning to be a part of the solution (Col 3:18-21).

In the same way there are often those in churches who are quick to blame elders, preachers and deacons for failures in ministry and perceived slights or favoritism. Yet, my experience has been these same people rarely are active workers. They are excellen at fault finding and protesting, but short on solutions and personal involvement.

Every relationship is a two-way street of give and take, mutual responsibility, and unselfish partnership. The crisis of our culture is individualism. Selfishness. And an insolent attitude that is entirely focused on rights instead of responsibilities.

Paul’s advice to the Philippians would greatly calm some of the challenges in many sectors in our society. “Do nothing from rivalry or conceit, but in humility count others more significant than yourselves. Let each of you look not only to his own interests, but also to the interests of others” (Phil 2:3-4)

Finally, please don’t read into the post something that is not here. We recognize that in all areas of life there are legitimate concerns that need to be addressed. And solved. The tension felt today in certain precincts is real. Palpable. And warranted. However, David Brown’s proposal of participating in the solution instead of protesting the problem is commendable.

Often our problem is not really our problem. It’s our attitude toward it that hinders solutions.

4 responses to “Excellent Advice From A Police Chief”