GREAT VERSES OF THE BIBLE: Genesis 1:1 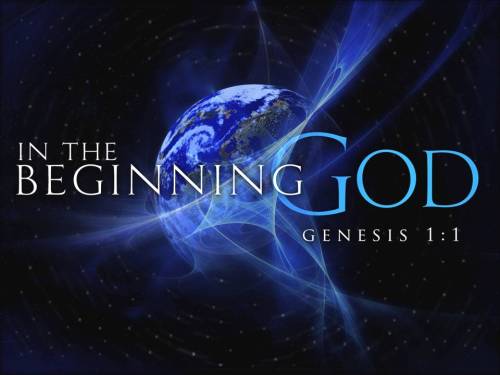 He was just a little lad,
and on the week’s first day,
Was wandering home from Sunday School,
and dawdling on the way.

He scuffed his shoes into the grass;
he found a caterpillar
He found a fluffy milkweed pod,
and blew out all the filler.

A bird’s nest in a tree o’er head
so wisely placed and high
Was just another wonder
caught by his eager eye.

A neighbor watched his zig zag course,
and hailed him from the lawn
Asked him where he’d been that day,
and what was going on.

“Oh, I’ve been to Sunday School,
(He carefully turned a sod,
And found a snail beneath it);
I’ve learned a lot about God”

“M’m’m, a very fine way,” the neighbor said,
“for a boy to spend his time;
If you’ll tell where God is
I’ll give you a brand new dime.”

Quick as a flash his answer came!
Nor were his accents faint –
“I’ll give you a dollar mister,
if you tell me where God ain’t.”

This poem by my favorite author, Anonymous, speaks to one of the great verses in the Bible. In fact, it’s the very first verse–Genesis 1:1.

“In the beginning God created the heavens and the earth.”

Genesis, the book of beginnings, records the creation of the cosmos and the beginning of the human race. While the Bible is not intended to be a book of science, it does not conflict with proven facts of science. In fact, five fundamental principles of natural phenomena are found in this first verse.

Ironically, it was a staunch evolutionist, Herbert Spencer, an English philosopher and biologist, who in 1882 identified these basic manifestations of the universe: space, time, matter, motion and force.

God is the original “Force.” He is the “First Cause.” The Bible teaches that He is omnipotent. His power is beyond measure. Incomprehensible! Inscrutable! And incredible!

When God moves things happen! The word “created” speaks to divine activity and action. It means to shape. To fashion. To form. Our God is a living and active God. He is unique. Unparalleled. Unequalled. He can create something out of nothing!

God literally spoke the cosmos into existence! “By the word of the Lord were the heavens made, their starry host by the breath of his mouth.” (Ps 33:6). The sun, moon and stars are the handiwork of God creation. And they declare His glory, power and preeminence.

What an incredible place is planet earth. Lawrence Richards called earth “the odd planet.” It’s different than all other planets. We are unique in our solar system with the perfect atmosphere that makes life possible. Why? Because God made the earth specially for the dwelling place of His creation!

Genesis 1:1. Ten words. Simple. Succinct. And yet profound in their implication and application.

The Psalmist was right when he wrote: “The earth is the Lord’s and the fullness thereof, the world and those who dwell therein…The Heavens declare the glory of God, and the sky above proclaims his handiwork.” (Ps 24:1; 19:1)

6 responses to “GREAT VERSES OF THE BIBLE: Genesis 1:1”