The Redeeming Virtue of Forgiveness 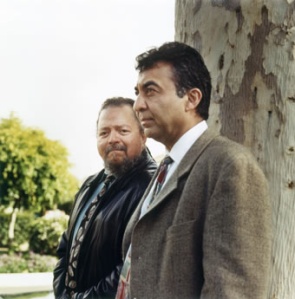 “How many of you have lost a brother or sister as a result of violence?”  asked Azim Khamisa the students at San Diego’s CorreiaMiddle School. About a third of the several hundred gathered in the school auditorium raise their hands.

“And how many of you would want revenge if a brother or sister was killed”? Khamisa probed.  Almost every hand shot up.    Then he asked, “Would revenge bring (my son) back?

By now the whispering and shuffling had ended and these kids are hooked on the unusual message of the Islamic immigrant whose mission is to end youth violence in the United States and around the world.

The 60-year-old, Azaim Khamisa, came to the US from Kenya to flee persecution and violence and from the Idi Amin regimen in Uganda. His only son, Tariq, was a college student, working as pizza delivery person to make some extra money.  On January 22, 1995, Tariq walked into a trap set by gang members who had ordered pizza with the intent of  robbing the delivery person.  When Tariq refused to hand over any money, 14-year-old Tony Hicks drew a stolen 9mm semiautomatic handgun and shot him through his heart and lungs.  He drowned in his own blood.

As any of us can only imagine, Azim was devastated at the senseless shooting of his only son.  He descried the pain as a “nuclear bomb detonating” in his heart.  The next several months found Khamisa drowning in grief.  Then something unexpected happened.  After a getaway at a Mountain cabin, he decided to forgive his son’s murderer and reach out to his grandfather, Ples Felix.

I read the gripping details of this story yesterday in the Southwest airline magazine, Spirit.  Within a year Khamisa began the Tariq Khamisa Foundation, which “teaches the virtues of nonviolence to San Diego middle schoolers and young people nationwide.”  Surprisingly Ples Felix has become the biggest supporter of this project and often travels with Khamisa to speak in school assemblies.

Forgiveness.  It’s a simple word.  We know what it means.  But it’s difficult to practice. This intriguing story displays the spirit of forgiveness in the most difficult and trying of circumstances.  Khamisa likes to quote Nelson Mandela who often said, “resentment is like drinking poison and then hoping it will kill your enemies.”

Christ calls on his followers to practice forgiveness.  It is an integral part of the model prayer. “Forgive us our debts, As we forgive our debtors.”

Later his ministry when Jesus was teaching on this vital topic, Peter asked, “Lord, how often shall my brother sin against me, and I forgive him? Up to seven times?”  I imagine he thought that he was being very generous!  But Jesus responded “I do not say to you, up to seven times, but up to seventy times seven.”  In other words forgiveness should be unlimited.  Unbounded. Timeless.

The article I read tells of harmful effects of failing to forgive.  Dr. Frederic Luskin of Stanford university says that “nursing a grudge means holding on to anger, and prolonged anger spikes the heart rate.”  It also raises your blood pressure.  Lowers immune response.  And leads to depression.  But there is something even more serious when we fail to forgive.

In other words, as George Muller expressed it, “He who fails to forgives others burns the bridge over which he must walk himself.”

3 responses to “The Redeeming Virtue of Forgiveness”