Is the Risk Worth it? 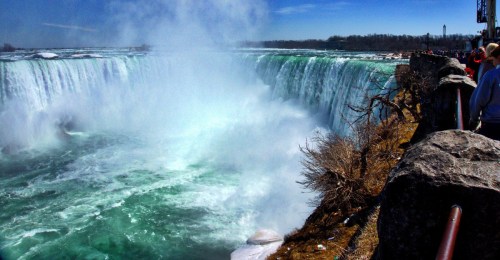 On this day in history, October 24, 1901, Annie Edson Taylor, was the first person to take the plunge over Niagara Falls in a barrel.

The 63-year-old schoolteacher was hurting financially and seeking fame, so she came up with this stunt she thought would grab the public’s attention.

Although a bit battered, Taylor survived the 20-minute journey that violently knocked her from side to side as she propelled over the edge of Horseshoe Falls. After a few photo-ops and speaking engagements, her fame soon diminished and she never made the fortune she had dreamed about.

It’s amazing Taylor survived. Many who’ve tried that stunt didn’t live to tell about it. It’s incredible the crazy things people will do for money or recognition. But we live in a generation that loves to take risks. To gamble. To seek fame or fortune in the most perilous means possible.

However, even more amazing are the risks folks take with their eternal souls. Jesus warned: “And do not fear those who kill the body but cannot kill the soul. Rather fear him who can destroy both soul and body in hell.” (Matt 10:28).

Too many Christians are living in a risky, fool hearty fashion that jeopardizes their most prized possession–their soul.

However, the World Health Organization estimates there are over 200 million alcoholics worldwide. An estimated 88,000 people die from alcohol-related causes every year in the United States. Over 10,00 people die every year on US highways due to crashes that involve alcohol-impaired drivers. The misuse of alcohol costs the US over $249 billion annually.

Solomon was right when he wrote, “Wine is a mocker, Strong drink is a brawler, And whoever is led astray by it is not wise (Prov 20:1).
Is it worth the risk?

Another risk people take involves sexual flirting. This includes not only improper interactions with other people, but what we read, watch and listen to.

How many affairs and consequently broken homes began with an “innocent” meeting alone with the opposite sex? Or a flirtatious glance? Or a suggestive comment? Or a playful response?

The plague of pornography and various sexual addictions rampant in our society today all attest to the dangers of sexually charged magazines, movies, and internet sites.

The Bible cautions, “But among you, there must not be even a hint of sexual immorality, or of any kind of impurity, or of greed, because these are improper for God’s holy people” (Eph 5:3).

Is the temporary titillating pleasure really worth the risk?

Spiritually risky behavior may take many different forms. Satan knows our weaknesses and will attack us where we’re most vulnerable. Paul advised, “Avoid every kind of evil” (1 Thess 5:22).

Like Lot of old, we can camp to close to sin. While we may be vexed by the unrighteousness around us, the proximity and pervasiveness of ungodliness may result in destruction. Both physically and spiritually.

The wise man warns of risky conduct when he rhetorically asks, “Can a man take fire to his bosom, And his clothes not be burned? (Prov 6:27).

The next time you’re tempted to engage in something that is at best questionable, and at the very worst is outright sin, ask yourself “Is the risk worth it?”

5 responses to “Is the Risk Worth it?”