Would You Help a Drowning Stranger? 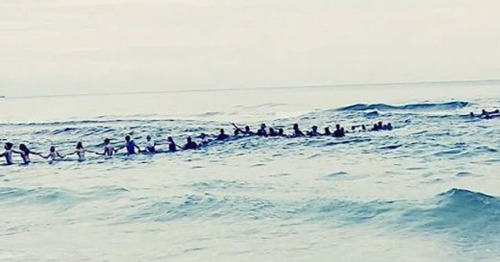 “I’m going to die,” Roberta Ursrey thought to herself. “My family is going to die this way.”

Ursrey, who had just moved to Florida a month ago, was at Panama City Beach Saturday night, with her husband, mother, nephew and two sons, Noah, 11, and Stephen, 8. The boys had gotten separated while chasing waves on a boogie board.

While trying to rescue the boys, the Ursreys and four others were caught in a treacherous riptide about 100 yards out in the Gulf. “The tide knocked every bit of energy out of us,” Ursrey said.

When beachgoers, Jessica and Derek Simmons first saw the commotion and the police arrive, who were waiting for a rescue boat, Jessica thought “These people are not drowning today,” she told the Panama City News-Herald. “It’s not happening. We’re going to get them out.”

Someone then shouted, “Form a human chain!”

On shore, the human chain began forming, first with just five volunteers, then 15, then dozens more as the rescue mission grew more desperate. In the meantime Jessica and Derek Simmons swam past the 80 or so human links, some who couldn’t swim, and headed straight for the Ursreys, using surf and boogie boards to aid their rescue efforts.

Finally, almost an hour from the initial struggle, as the sun began to set, all 10 of the stranded swimmers were safely back on shore.

“It actually showed me there are good people in this world,” Ursrey commented afterward.

Jessica Simmons expressed a similar sentiment on her facebook page: “To see people from different races and genders come into action to help TOTAL strangers is absolutely amazing to see!! People who didn’t even know each other went HAND IN HAND IN A LINE, into the water to try and reach them.”

Thankfully this story had a happy and heart-warming ending. Yes, there are many good people in the world.

As I reflected on this event, I couldn’t help but think of a spiritual application. And two old hymns from my childhood came to mind, “I was Sinking Deep in Sin” and “Throw Out the Life Line.”

At one time or another, have we not all wandered from “the peaceful shore”? Gotten in deep over our heads? And found ourselves “sinking deep in sin”?

The “Master of the Sea” has heard our “despairing cry.” He has rescued us from the “angry waves.” He has lovingly lifted us up to safety. Maybe our lifeline has been a “human chain” that reached out to save us from drowning in the sea of sin.

Has there been someone in your life, like the Simmons were to the Ursreys, who said, “These people are not drowning today”? And you are spiritually alive today because they went out of their way to save you?

If you are standing on the shore of safety, are you willing to help a fellow human being who’s “sinking deep in sin”?

It takes courage to wade into perilous waters to save someone. It is inconvenient. And it is a selfless expression of care, concern, and compassion for another human being.

What about in our church family, when a brother or sister wanders away? Do we intervene? Do we throw out a life line? Do we form a “human chain”? Do we say “these people are not drowning today”?

Soon will the season of rescue be o’er,
Soon will they drift to eternity’s shore;
Haste, then, my brother, no time for delay,
But throw out the life line and save them today.

Tagged as I was sinking deep in sin, Jessica and Derek Simmons, Roberta Ursery, Throw out the life line

One response to “Would You Help a Drowning Stranger?”