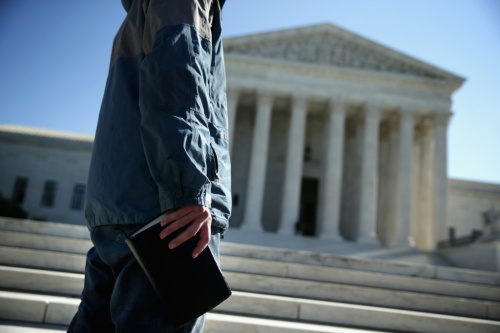 In the wake of the Supreme Court’s narrow 5-4 decision to legalize same-sex marriage, there have been a rash of predictions and dire warnings about the impact this will have on religious freedom.

The majority opinion seeks to appease such fears.

“Finally, it must be emphasized that religions, and those who adhere to religious doctrines, may continue to advocate with utmost, sincere conviction that, by divine precepts, same-sex marriage should not be condoned. The First Amendment ensures that religious organizations and persons are given proper protection as they seek to teach the principles that are so fulfilling and so central to their lives and faiths, and to their own deep aspirations to continue the family structure they have long revered. The same is true of those who oppose same-sex marriage for other reasons.”

Also dissenting was Judge Clarence Thomas who opined, ” Aside from undermining the political processes that protect our liberty, the majority’s decision threatens the religious liberty our Nation has long sought to protect.”

There have been numerous newspaper articles, facebook posts, blogs and examples given from other countries that suggest our religious freedom is going to be restricted. Everything from muzzling the mouths of preachers who dare to condemn homosexuality, to churches losing their tax-exempt status, to actual fines or imprisonment are suggested possible consequences.

The truth is no one, not even the legal scholars, can predict with certainly the potential fallout from this ruling. However, let me suggest that religious freedom is NOT going to be restricted for true disciples of Christ.

How can I know that?

Because our real “religious freedom”is not based on the United States Constitution. It is founded in our faith in Christ in obedience to His Word. Jesus said, “And you shall know the truth, and the truth shall make you free.” (Jn 8:32).

Jesus’ words were spoken to the Jewish people who were in Roman bondage. Politically and socially they were fettered with certain restrictions. Yet, Jesus’ focus was on spiritual freedom. He further elaborated by affirming this divine Truth.

“Most assuredly, I say to you, whoever commits sin is a slave of sin. And a slave does not abide in the house forever, but a son abides forever. Therefore if the Son makes you free, you shall be free indeed. (John 8:32-36)

For too long too many of us have wrapped the American flag around the Bible. Some have equated political partisanship with Christian allegiance. We have intertwined our hymns with patriotic songs. And could it be that we have uttered “God bless America,” thinking it was a divine right instead of the blessing of our beneficent Father?

Our freedom comes from a Higher Power and a greater Lawgiver. Our freedom is spiritual. Personal. And God-ward. It cannot be restricted by Presidential edicts, Congressional laws or Supreme Court rulings.

Oh, sure we may lose tax advantages, suffer slights, or become the object of social scorn. We may eventually be imprisoned for our faith, but our liberty in the Lord cannot be limited, lessened or eradicated.

Our freedom transcends national allegiance, political affiliation or physical advantages. Our freedom is guaranteed in the blood of our Redeemer and anchored in His empty tomb.

Whatever the future holds, may our attitude toward the enemies of Truth reflect the spirit of Christ and may our speech be with grace seasoned with salt.

” For this is the will of God, that by doing good you may put to silence the ignorance of foolish men — as free, yet not using liberty as a cloak for vice, but as bondservants of God. Honor all people. Love the brotherhood. Fear God. Honor the king.” (1 Pet. 2:15-17).

6 responses to “Will The Supreme Court Ruling Restrict Religious Freedom?”